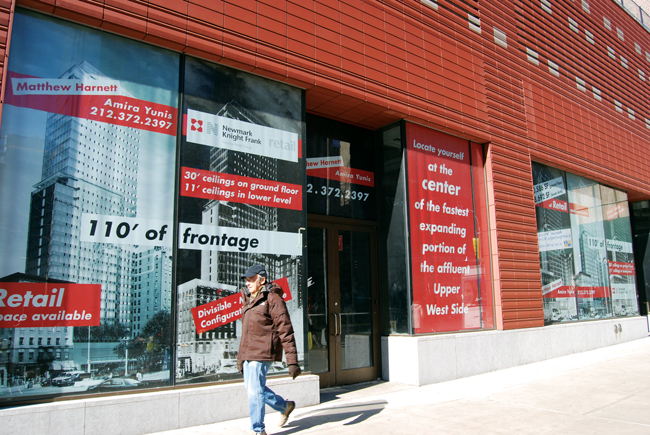 West Side of Broadway between 99th and 100th Streets.

Walking along Broadway through the Upper West Side, vacant storefronts have become frequent sights. They appear to be an epidemic, their fates only crippled further by current economic woes. Whether newspaper-covered display windows are the result of high rents, slow business, or a store seeking a new location, local retail is looking bleak. break On Broadway between 98th Street to 101st streets alone, there are seven vacant storefronts with no serious prospective retailers. While some have expressed interest in moving into the neighborhood—the popular chain Urban Outfitters signed a 20-year lease less than two months ago for the space of the landmark Metro Theater between 99th and 100th streets—the neighborhood's retail outlook is mostly grim. Next door to the Metro, at 2628 Broadway, and across the street, at 2625 Broadway, vacancy persists. Those two spaces total 21,263 square feet of unused property on one block. According to retail leasing broker Elliott Dweck, whose company, Besen Retail, represents two vacant spaces between 100th and 101st streets, few deals have been going through. "We had a few good leads, but there are always problems, sometimes with the tenants' credit," Dweck said. "You need money to make money," he added. Dweck said that he was showing one space to a shoe store this week, but the prospects were low. "We keep having issues with leases billing out. With people spending less and trying to save more, many potential leasers are not interested in making a long-term commitment. But perpetual vacancy is troubling for locals and existing stores. "We seem to have a vortex for bad business," Jacob Gordon, a neighborhood resident, said. Gordon lives in an apartment building wedged in between two empty retail spaces. "Things are closing left and right," he added. With fewer stores open, some shoppers turn to locations where they can find everything they need in one area. With people looking elsewhere, store closings can become a domino effect. While Nails and More, between 98th and 99th, has managed to evade the plague that hit Vinacciolo Wine Bar and Restaurant and Oppenheimer Meats on the same block—both of which have been out of business for months—employees do not feel any real economic stability. "Of course, there is always a worry for us," Helen Mohamed, an employee of the salon, said. "People used to come out from the restaurant and into here," Mohamed added. "Now, it is very slow." Some managers attribute their survival to loyal patronage. "We have been here five years. Our clothes serve the women of the Upper West Side," Lilach Pariente, manager of Rootchi, next to the Metro Theater, said. Pariente added that Rootchi is eager for Urban Outfitters to open its doors in ten months. "We are the only clothing store around here. We love competition. We need it." Elliott Dweck also expressed this reserved optimism. "With Urban Outfitters moving in, everyone is breathing a sigh of relief." Lease signing on this block, however, has not yet become contagious. Despite the current abundance of vacancies, prospects for the future varied. "I think now the expectations are that the landlords are going to come down with smaller 5-year leases, just to get the dollars coming in again," Dweck suggested. Dweck said that startup businesses have no place in this economy, but family owned stores are on the rise again. "Whether it is an immigrant or American family, if you have a mom, a pop, a son, a daughter, all working hard, you can survive. One store, make a living. More than one store, you make money." For some, pessimism persists. "It is going to take a miracle from God for this to change short term," said Mike Saleh, a concierge at 2628 Broadway. Others are bracing themselves for more and more chains. "If anything opens, it will be a bank, a Dunkin' Donuts or a Starbucks. Oh, and don't forget Duane Reade," Gordon said.