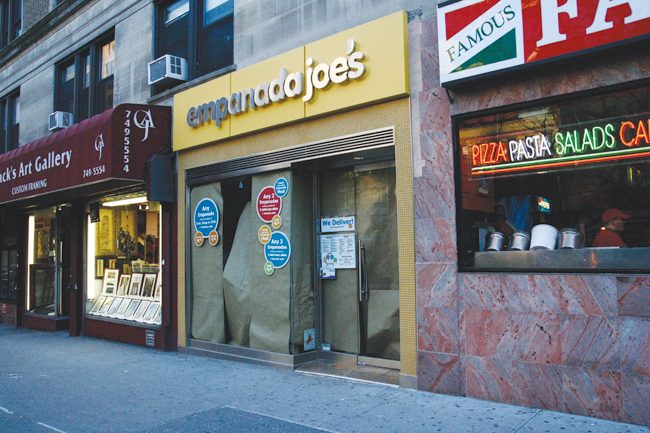 Joining the graveyard of Morningside eateries is Empanada Joe's on 111th Street and Broadway, which served its last spicy turnover when it permanently shut its doors a few weeks ago. Yet most Columbia students and local residents seem glad to see it go. break When Empanada Joe's first covered its windows with brown paper in late January, a sign outside informed the public that the restaurant was "closed for renovation" and would reopen on Feb. 2. With this deadline well past, workers of the surrounding businesses confirmed that Columbia students and local residents will have to say goodbye to the empanadas for good. "They ran out of business," Frank Brcha, manager of Famous Famiglia pizzeria, said. "The sign was just a sign. They are not reopening." Brcha said he spoke directly with Empanada Joe's manager. "They've tried very hard, but they couldn't make it," Brcha added. An employee at Jack's Art Gallery next door—who wished to remain anonymous because the owner of the space that houses the gallery also owns empty Empanada's location—confirmed Brcha's statements. "Here, we are just trying to hang on, but landlords are getting more greedy," the employee added. Empanada Joe's has another location in Chelsea, but its manager—who would identify himself only as Chris—declined to comment on the closing of the 111th Street store. Chris said of his own store, "It has been pretty good here, pretty busy. We are doing okay." The Empanada Joe's branch in Midtown closed this month as well, after being open for less than six months. Many local residents and Columbia students alike expressed their disdain for the small eatery a few blocks south of campus. "I didn't like it," Sofia Pacheco-Fores, CC '12, said. "It was very expensive and the empanadas were small. Afterwards, I felt sick." Neighborhood resident Sue Etkin agreed that Empanada Joe's did not provide a well-priced, substantial product. "I think they blew it. They charged too much money. Their portions were too small," Etkin said. But, she was still surprised at their closing. "They have Columbia here. They should have done amazingly well," she said. Empanada Joe's, which opened last June and replaced the Wrapp Factory, boasted a menu comprised of small $3 empanadas with a variety of fillings. Many Columbia students said they would pass Empanada Joe's on their way to Chipotle, but they never had a desire to go inside. "They had no advertising, no coupons, it just didn't look interesting," Daniel Mitura, CC '09, said. Rachel Mosely, CC '10, agreed. "I went once and left. I looked at the menu and didn't see anything appealing." Josie Bailey, SEAS '11, said there was one group that would be sad to hear the news. "The Episcopalians have Empanada Joe's every Sunday after church," Bailey said. "The chaplain brought it for us." But, Bailey added, "When there is Chipotle next door, who is going to go to Empanada Joe's?"