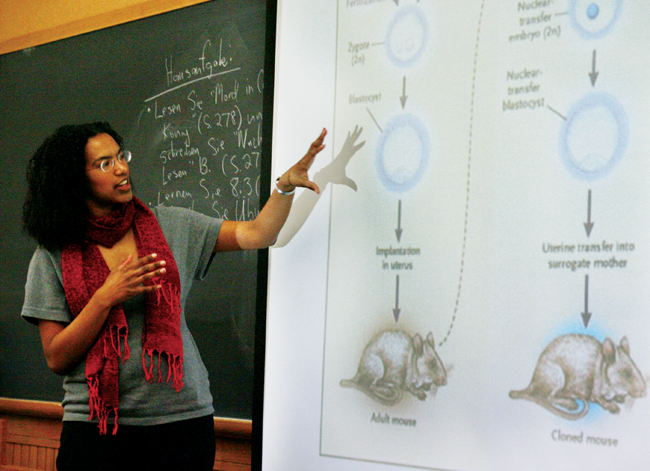 While advertisements catering to college students offer thousands of dollars to egg and sperm donors, Columbia Right to Life is questioning students' awareness of ethical issues involved with methods of fertility. "I've seen fliers [for donors] around campus; we're at a point where it's crucial for students to know what they're doing," said Mary Boadu, CC '10 and president of Columbia Right to Life, a new student group that represents the minority pro-life voice on campus. Boadu joined Columbia Right to Life members and other attendees Wednesday night for a discussion with Shannon Joseph, a United Nations Advocacy Specialist for the World Youth Alliance, on issues including stem cell research, in vitro fertilization, and assisted reproductive technologies. The event was sponsored by Columbia Right to Life, the Columbia University College Republicans, Columbia Political Union, and Columbia Catholic Undergraduates. "We're allowing the creation of situations that wouldn't happen naturally," Joseph said, expressing her opposition to the use of embryonic stem cells in the market for reproductive services. According to Joseph, controversies arise from what she said is becoming a "new eugenics movement in the US." Among these issues are the discrepancy between the rights of potential parents and those of potential children. "Whose rights should take precedence?" Joseph asked the group, which responded with conflicting answers. One attendee said that to be a human requires consciousness. "But how do you know when consciousness begins?" responded Michael Hannon, CC '12 and a member of Columbia Right to Life. Continuing the discussion, Joseph cited statements by donor-conceived adults angry about donor anonymity, inaccessible medical information, and unconventional parenting. "A donor-conceived child can have five parents ... a social mother, a gestational mother, a sperm donor father ... a social father" and more, considering gamete fusing and mitochondrial DNA. Joseph concluded by cautioning Columbia students who may consider donating eggs or sperm. "They're going to sell their sperm and eggs and have their biological child walking around," Joseph said. "I don't think people understand that." news@columbiaspectator.com