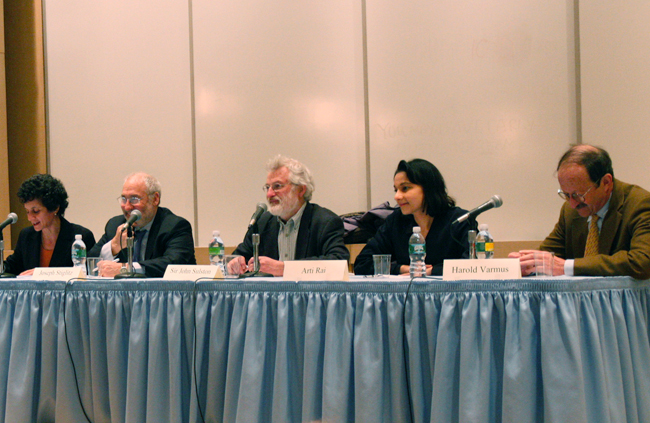 A group of experts in law, science, and economics, including three Nobel laureates, spoke on the issue of intellectual property

As the record industry's copyright infringement lawsuits wind down, some Columbia students will be breathing a sigh of relief. But the broader issue of how intellectual property should be regulated remains a subject of intense debate. break Before a full audience in the Schapiro Center's Davis Auditorium Wednesday night, a panel of four experts in law, science, and economics, including three Nobel laureates, took up the issue of intellectual property regulation. The panel agreed that the current system, especially the patent system, is stifling progress and must be overhauled. But they had different ideas about what might be done to fix the problem while preserving incentives that reward innovation. After a brief introduction from the moderator, health policy and management professor Sherry Glied, University Professor and Nobel laureate Joseph Stiglitz opened the discussion by outlining his case against the current intellectual property regime. "The first argument is that ... the most important input to the production of knowledge is knowledge," he said, adding that the open dissemination of information is the surest route to more discoveries. He also noted that by their very design, patents create monopolies, which are less efficient than competitive markets, and said that the patent system grants too many rights to patent-holders, leaving the system open to abuse. Nobel laureates Sir John Sulston and Harry Varmus, College of Physicians and Surgeons '66, provided a scientific perspective, suggesting that life sciences research has been hampered by commercial concerns. "It's not just about IP [intellectual property], it's about rebalancing the way we fund things," said Sulston, a pioneering geneticist, complaining that too much private funding tends to "short circuit" research by subjugating scientific discovery to the short-term profit motive. He criticized privately-funded research for hindering the free dissemination of results, adding that for effective progress to occur, "everybody needs to see all of the data at once, not just some of it." Varmus picked up on this point, explaining that scientists' collective obsession with publishing their work in prestigious journals has led to a biased system that only publicizes a small subset of useful scientific results. The fourth panelist, Duke Law School professor Arti Rai, was not quite so eager to uproot the patent system as some of the other panelists. "I think patents do play an important role, a role that has unfortunately been distorted," she said. She described the history of patent law as a "one-way ratchet up." The panelists agreed that Western intellectual property regulations are broken. But in considering how they could be fixed without removing the incentives which encourage innovation, none of the panelists were in favor of completely eliminating the patent system. They proposed a variety of alternatives which could largely supplant it. Stiglitz suggested a prize system, in which a government body would provide rewards to anyone able to tackle challenging problems in science and medicine. Varmus detailed his own partial solution to the scientific side of the problem—open access, in which scientists could submit their papers to special Internet journals. These journals would publish the results of all carefully-conducted scientific studies so that the scientific community as a whole, not the editorial boards of prestigious scientific journals, could decide for themselves which results are important. Varmus himself co-founded the Public Library of Science, a major hub of the open access movement that publishes a variety of online journals. "The Public Library of Science, by 2010, will be fiscally self-sustaining," Varmus said. news@columbiaspectator.com