Looking Beyond the Hijab

Looking Beyond the Hijab 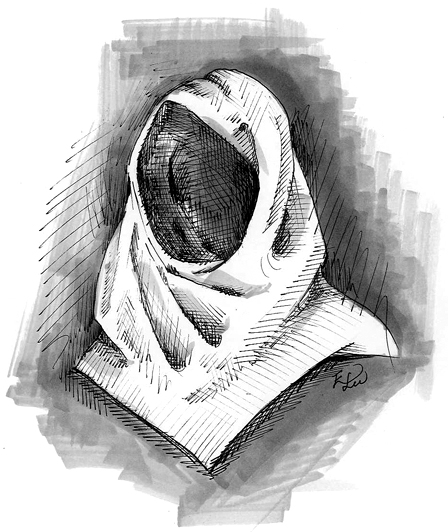 When I was first asked to write a piece on the hijab, I was unsure of where to start. Perhaps I should begin with a definition of what the hijab is. Or a historical lesson on the hijab throughout the centuries. But maybe a personal narrative would be more interesting? I was halfway through my third draft when I realized that a standard definition of the word "hijab" does not exist, that summarizing the history of the hijab is impossible to do in under two hundred pages, and that my personal narrative would be far from interesting to anyone but myself. So instead, I'll begin with a different question: why is the hijab viewed as such a significant symbol? In my eyes, the hijab is simply a 3x4 silk rectangle that covers my hair. It is neither the age-old burqa (the complete body covering women in Saudi Arabia and Afghanistan wear), nor the niqab (a covering that hides the entire face, except for the eyes). It is not the oppressive black cloth often associated with the Taliban in pictures broadcast in the media. The hijab is not meant to represent a woman's seclusion from society or her prohibition from interacting with members of the opposite gender. It isn't a cultural symbol or a political message—it is an article of clothing millions of Muslim women all over the world choose to wear (or not wear) at will. When I don the hijab before I leave my room each morning, I'm usually too preoccupied with ensuring it matches my outfit to worry about the political or ideological message it sends. Personally, I'd like to think that when my friends look at me, they see more than just the hijab. In fact, the only time my friends do refer to the hijab is when they bellow across the hall for me to put it on before dinner so that we're not late... again. Similarly, I do not view the hijab as the defining issue of my personality. There is much more to my beliefs and opinions than a simple headscarf can represent, and my identity is far too large and complex an issue to be encompassed by the fact that I cover my hair. Thus, I am often puzzled by the fact that many cannot see beyond the hijab. Like the elderly librarian who approached me at Butler last week, smiling kindly as she took my arm and informed me that there was a woman in the back who spoke "my language," if I needed anything to be translated. Or a professor of mine last semester who drew a ring around his head pointedly as he instructed me to reconsider the "life choices" I had made because a few of them could seriously hurt my career goals. How some can make so many assumptions based on a simple scarf strikes me as not only puzzling, but also a tad absurd. One expects more, especially in a setting as academically inclined and culturally diverse as Columbia's. Values such as "tolerance" and "open-mindedness" are often touted on campus, but these terms entail more than an open-minded acceptance of only the values one chooses to agree with and espouse. Rather, tolerance and open-mindedness apply more correctly to situations in which one tolerates others' opinions and beliefs even though they may differ from one's own. But back to the main question: why is the hijab viewed as such a significant symbol? My own version of the answer (and there are several answers, admittedly) is that it should not be seen as such. A hijab-clad woman should not have to defend or justify covering her hair to others. The hijab should be seen for what it is: a piece of fabric that covers one's hair, nothing more, and nothing less. Interestingly enough, there is no sole reason as to why Muslim women choose to cover their hair. Some feel it is culturally important, others that it is religiously mandated. Of the many scholars and academics who have reviewed the role of the hijab in Islamic societies, some have written that it is a cultural form of protection for women whereas others feel that it is an oppressive symbol of female subjugation. In writing this piece, I do not feel as though I represent the other Muslim women on campus who wear a headscarf. I recognize that each hijab-clad Columbia student is a different person with a highly individualized set of beliefs and experiences. I certainly cannot speak for them. Then again, neither can their hijabs. The author is a Columbia College first-year. She is a member of the Columbia Spectator Editorial Board.