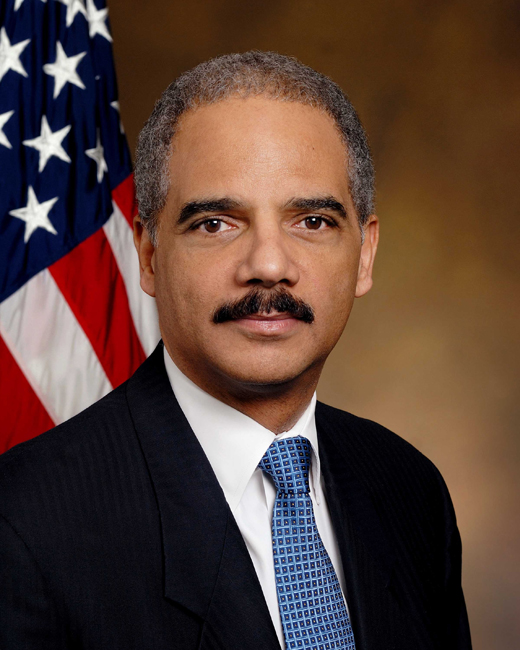 Eric Holder, U.S. Attorney General, CC '73, Law '76, and a Columbia University trustee, will be Columbia College's 2009 Class Day Speaker, the senior class council announced on Low Library steps Tuesday afternoon. Holder—the first black man to head the Justice Department—will address graduating seniors on May 19 on South Lawn. break "We're elated to have the first African-American attorney general of the United States," said Mark Johnson, senior council president and CC '09. Holder is the second Columbia alumnus in a row to become attorney general, succeeding Michael Mukasey, CC '63. An active member of the Morningside Heights community during his time as a student, Holder volunteered at a Harlem youth center and joined Concerned Black Men, an organization of male mentors for teens. Holder has maintained ties to Columbia as a member of the University's board of trustees. Administrators have commended his commitment to the board. "He's been a very good trustee—attending meetings, listening, commenting, adding important points to the conversation," University President Lee Bollinger said in a phone interview in November 2008. "Eric Holder has been a loyal and active alumnus of both our College and Law School whose impressive career exemplifies the civic values and commitment to public service that we hope to nurture in our students across all professional fields and academic disciplines," Bollinger said in a press release on Tuesday. "Eric Holder has stayed closely connected to the College and to his classmates while building an outstanding career serving the public good," Columbia College Dean Austin Quigley said in the release. In addition to serving as deputy attorney general in the Clinton administration, Holder has been U.S. attorney for the District of Columbia, a federal judge on the court bench in Washington, and a Justice Department prosecutor, where he was known for his aggressive attacks on corruption. Most recently, he has been a partner at the DC law firm Covington & Burling. Holder's Class Day speech will come within days of Secretary of State Hillary Clinton's address at Barnard's commencement. Students were pleased with the announcement. "I'm still a little jealous of Barnard's snatching of Hillary, but I think Holder will stimulate the audience," Jessica Cohen, CC '09, said. Still, Cohen said she was "ecstatic" about the choice. "He seems to have especially strong ties to Columbia," she said. "I'd really like to hear how his time at Columbia has informed his career," added Cohen, who will attend Columbia Law School next year, following Holder's academic path. CC Class Day speakers must be affiliated with the University. Last semester, the CC '09 class representatives solicited nominations for 25 potential names, and the class of 2009 was given the opportunity to vote among them. The top eight were presented to the committee, which proceeded with the selection process. Other popular picks included author Paul Auster, CC '69, Maggie Gyllenhaal, CC '99, Art Garfunkel, CC '65, Washington Post editor Marcus Brauchli, CC '83, and, of course, his classmate, President Barack Obama, CC '83. Joel Klein, CC '67 and chancellor of the New York City Department of Education, spoke at Class Day last year. Although his speech was generally well-received, many seniors were disappointed with the choice—especially since Klein's boss, Mayor Michael Bloomberg, seemed to upstage him by speaking at Barnard.