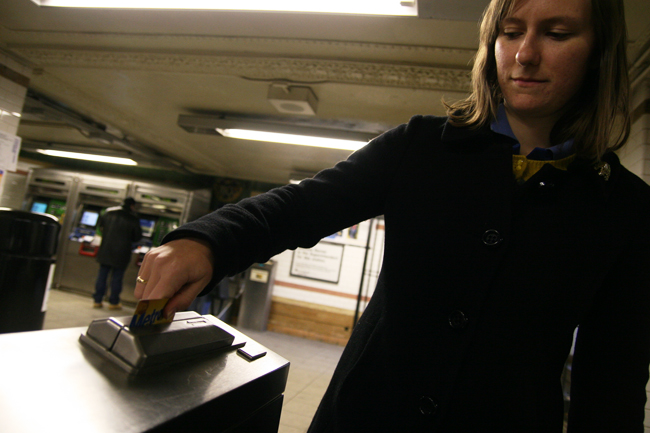 The finance committee of the Metropolitan Transportation Authority passed what has been widely termed a "doomsday" fare hike proposal on Monday, paving the way for the full MTA board to grant final approval in a vote scheduled for today. If passed—the likely outcome after apparent failure of negotiations with New York Governor David Paterson, CC '77—the base fare will go up to $2.50 from the current $2, which had remained constant since 2003. The cost of a monthly unlimited MetroCard will be $103, an increase of $22. The hike, proposed last July, is particularly controversial because it comes just a year after fares were last increased. While the base fare remained unchanged in that hike, unlimited MetroCard fares went up and the bonus structure—previously a 20 percent bonus on purchases of $10 or more—was reduced to 15 percent on purchases of $7 or more. The approaching hike has been met criticism from Columbia students and residents of West Harlem and Morningside Heights. Several local politicians have come out in opposition to the proposed service cuts, which include reduced overnight service on the 1 train and the M96 and M104 bus lines and the elimination of the M10 line, which connects Harlem to Penn Station. "I think it's unrealistic," Kelly Sinn, BC '11, said. "Living in New York, having affordable public transportation is a necessity." Sinn said she had an unpaid internship at a nonprofit organization and that the small transportation stipend she received did not even cover the current cost of a monthly unlimited MetroCard. Rider advocacy organizations have also come out in opposition to the tandem of fare hikes and service cuts, condemning the MTA for charging riders more for less service. "At $103 a month, you'd expect they'd have a sauna, a pool, and Pilates classes down there," reads a public service advertisement in many subway cars. "No business could get away with that," Sinn said. "If a gym was going to raise the cost of their membership and lower their hours, they wouldn't be in business." MTA spokesperson Jeremy Soffin wrote in a statement, "The MTA remains hopeful that a resolution can be reached on a comprehensive plan, but we must move forward with a vote on March 25 to ensure that the fare increase and service cuts can be put in place in time to balance our budget." The MTA currently has a $900 million deficit, and is legally bound to pass a balanced budget each year. In discussions about the current hike, the MTA has proposed raising fares every other year, with the next round to occur in 2011.