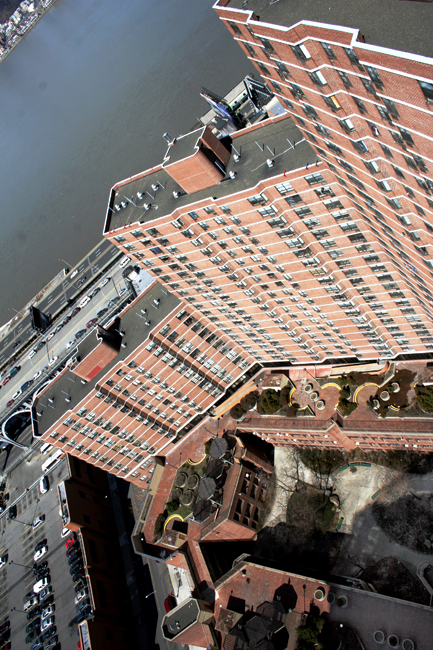 Felix Santana, a 30-year resident of 3333 Broadway, stood with friends outside a local deli and pointed across the street at the massive, 35-story West Harlem building he calls home. "They're hoarding those apartments," he said. Santana is among many tenants who are on the verge of losing their homes. The story of his building, known as 3333, is a common one in New York City. When it left Mitchell-Lama, the state housing subsidy program, rent prices were no longer subject to regulation and many residents were forced out or struggled to stay. Now, Santana and others are feeling an ever-expanding divide between the "new" and "old" and "rich" and "poor" tenants of this 1,100-apartment building between 135th and 136th streets. In order to cover the debt incurred by current 3333 owner Urban American Management when it purchased the building in 2007, the property management firm is seeking to draw a class of higher-paying tenants. But this means clearing out apartments rented by low- and moderate-income residents, especially those with vouchers through Section 8—an affordable housing program that subsidizes rent of privately-owned homes with funding from the U.S. Department of Housing and Urban Development's public housing authority. "They [Urban American Management] advertise beautiful studio apartments with hardwood floors and new countertops, but that's not what the rest of us have," Santana said, "It's a double-standard." Residents' complaints about leaky faucets, rodent problems, and vandalism often go unaddressed. Unresponsiveness to maintenance requests is a commonly used tactic among landlords who wish to chase out poorer residents and make room for higher-income tenants who will pay higher rent. This may be the case in 3333, according to the stories of Santana and others. "I told management I needed a bar in my bathtub because I'm a senior citizen, and they said it's not mandatory," Santana said. "Then, my screen got knocked out by a scaffold when they were cleaning the windows, and management told me to wait until the summer," he added, with a tremor rising in his voice, "It's just an open window until then." Residents with housing vouchers face further problems. "I have a voucher for three bedrooms, but my apartment only has two. Before, when it was Mitchell-Lama, I could have transferred. Now I can't, and it's a big problem," said Santa Chong, a resident of over 21 years. "My income dropped because I'm disabled, so I need the voucher, but I also need to transfer... I just can't." After their Section 8 vouchers expire each year, many tenants are kicked out before they can even reapply for new ones or find another place to live. Developer BSR Management began construction on 3333 in 1976 as part of the Mitchell-Lama program. Mitchell-Lama's aim is to provide low- and medium-income housing by offering incentives to developers, such as property tax exemptions and subsidized construction loans. But in 2005, things changed at 3333 when the building left the Mitchell-Lama program. BSR sold it to Cammeby's Realty Corp. for $85 million as part of a portfolio that included four other developments, and 3333 was then absorbed into the natural housing market. This meant deregulation of rents, an absence of government oversight, and the start of practices now preying upon low-paying tenants, according to Amy Chan, Mitchell-Lama organizer for resident rights advocacy group Tenants & Neighbors. In 2007, Cammeby's sold 3333 to Urban American Management for $278 million, again as part of a portfolio. The cost of the building—that is, the debt that needs to be repaid by the new owner to avoid foreclosure—nearly tripled over the course of two years. "Coming out of Mitchell-Lama was a big mistake," Chan said. "The building should not have been sold for triple the debt." In 1991, the State's Division of Housing & Community Renewal passed regulations prohibiting the rise of rents to market rate for Mitchell-Lama buildings constructed before 1974. But because 3333 was built after the cut-off date, it is not subject to the rent price regulation. As a result, 3333's new apartments—to which Santana referred—are priced at $1,500 to $2,000 per month, compared to the $600 monthly cost for apartments occupied by Section 8 voucher holders. Most of the tenants with Section 8 vouchers can't transfer to new apartments in the building because of the financial incongruity. Meanwhile, they are also prohibited from switching into older apartments that better match their voucher stipulations. "There is no government agency to oversee the landlord, no system to make the landlord match the occupancy on the vouchers," Chan said. "These apartments go up to market rents beyond what the tenants can pay, so we've seen a mass exodus from the building," said Nellie Bailey, co-founder of the Harlem Tenants Council. "People in Section 8 can't pay the new rent. It's a form of discrimination." "They should have kept Mitchell-Lama as a road block against this," said a 3333 resident who goes by only J.R., as he pointed to the building's facade. "It's gonna get a whole lot worse." The owner of 3333, Douglas Eisenberg, declined to comment. CORRECTION APPENDED: This article originally stated that the building was sold once for $85 billion, and again for $280 billion. It was sold for $85 million and $280 million, respectively. Spectator regrets the error.