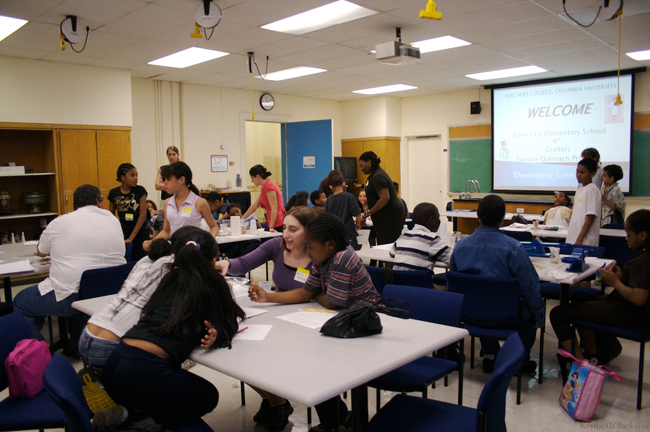 Looking relieved to file into the air conditioned classroom after having just finished their tour of Columbia's main campus, 22 fourth graders from River East Elementary School in East Harlem took their seats in one of the first science lecture halls created at Teachers College. As part of a partnership between TC's assistant professor of Science Education Felicia Moore Mensah and River East Elementary, these fourth graders spent the day at Columbia, first touring the campus, then participating in three hands-on science activities to help prepare them for the statewide science exam they will take later this week. "Good Morning, Dr. Moore," the students replied in unison to Mensah's greeting. When asked what they had seen on the tour, students answered "A giant cup," "a naked man thinking," and "science buildings." Mensah began working with the elementary school three years ago when Katie Smith, River East's vice principal and a TC graduate, contacted her because the school didn't have a science program. Mensah recalled, "I thought I could be a help to the school." Kasandra Brown, the fourth graders' science teacher, said that River East's administration had wanted to create a science classroom with more plants and animals than a regular elementary room. Mensah said her goal is to establish a successful science program beyond citywide initiatives. River East serves a predominantly African-American and Latino population, according to Mensah, who also noted that it is a Title I school, meaning it has a high proportion of poor students. While Mensah is involved with all grades' science education at River East, Tuesday's program at TC was geared toward reducing the fourth-graders' test-taking anxiety. She said she wanted them to "think about science in terms of fun, acknowledging the skills they have to take the test." The students rotated in small groups around three stations that featured hands-on experiments about magnetism, measuring, and physics. One student expressed a lot of enthusiasm, saying she was excited to do the experiments and that her favorite part of the tour was "learning that the library has two million books." As soon as Mensah said, "Go," the students eagerly began reading the instructions for their assigned stations, filling out their hypotheses on the worksheets at each place, and theorizing why one car went farther down the ramp or why certain coins were magnetic. "The students were very excited" to come to TC, said Brown. "They weren't sure what to expect. Hopefully, we can continue this partnership." Teachers from TC and River East agreed that this partnership is valuable for all involved. "I have seen students grow over the short time I've been with them," Mensah said. "They are more excited about science and able to think more about science." TC student Megan Wallner said, "Teachers College historically wasn't involved in the community," adding, "It's important to practice that [involvement]." Whether or not they realized it, the fourth-graders, immersed in their experiments and revealing toothy grins when they got an answer right, seemed to absorb the information at each station. In evaluating the success of Tuesday's program, Mensah said that the students were "engaged, having fun, and testing their ideas."