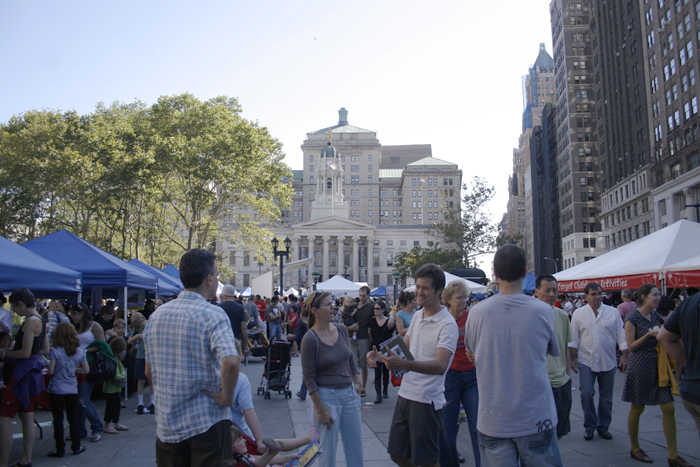 New Yorkers agree that the Brooklyn Book Festival was marketed to readers, writers, and graphic designers alike, from the inspirational words of Marie Mockett to the graphic creations of comic collective ACT-I-VATE.

Just as the narrator of the first novel, "Picking Bones From Ash," by Marie Mutsuki Mockett, CC'92, can claim a relation to the princess of the moon, Mockett herself grew up between two worlds. Born in California to a Japanese mother and an American father, Mockett took frequent trips to Japan in her childhood. The essential inquiry of her short stories, poetry, and nonfiction has sprouted from this trans-Pacific exchange. "In a way, I feel like a new culture is developing from the Asians who immigrated to the states and the Asian-Americans who frequently go back and visit Asia," Mockett said at Sunday's Brookyln Book Festival. "It's fascinating how the culture is mixing and creating a new third culture." At the festival , Mockett read from "Picking Bones From Ash" as part of a panel titled "Next Texts: Four Debut Novelists." Shanthi Sekaran, Marc Fitten, and Joanna Smith Rakoff also read from their first novels. The excerpt Mockett read chronicles the life of a mother and daughter in the small Japanese mountain town of Kuma-Ume. As she read, Mockett's melodic voice evoked a vision of Japan through the eyes of a young girl: part magical, with tales of mystical bamboo, and part universal, with tales of hiding from school bullies. Much like the work of Salman Rushdie, Mockett's story blends traditional folk tales with a more contemporary and American realist approach to storytelling. Mockett graduated from Columbia College in 1992 with a degree in East Asian languages and cultures. Her time at Columbia and path of study informed her work as a novelist. "Japan is a hard place to understand," she explained. "Many writers focus on a surface level with the beauty of Japan, [on] kimonos and cherry blossoms. ... My academic focus is to constantly dig deeper, [to] not accept the surface." Mockett recalled that after her senior seminar on "Women in Japan," her professor, Barbara Ruch, told her that "women in Japan have always been writers." "It's not like I felt like I needed to have permission to write," she said, finding solace in the long tradition of female writers in Japan. "The first psychological novel, 'The Tale of Genji,' was written by a woman, Murasaki Shikibu." During these troubling times for publishing, Mockett expressed gratitude to have the opportunity to release her first novel and speak at such a prestigious event. "Lots of writing is just me, home in sweats with my cats," she said. To be published is "a dream, really. It's like completing the circle." "Picking Bones From Ash" will appear in bookstores on Oct. 1.