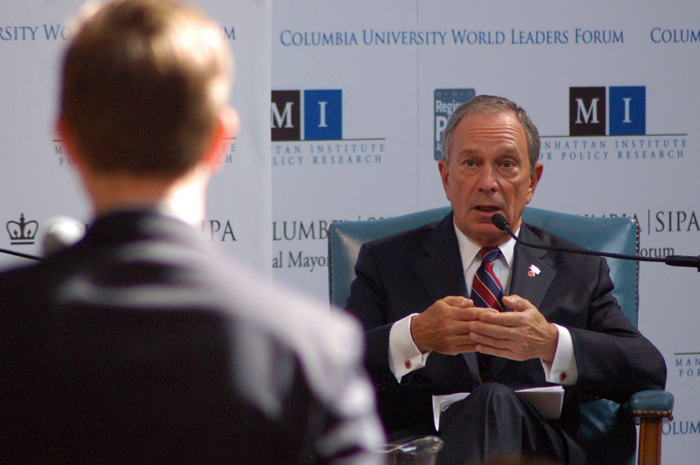 Ever wondered what New York City Mayor Michael Bloomberg's British counterpart is like?

Bloomberg and Johnson talked economy, the advantages of each city over the other, and past and future collaboration between the two to an audience packed into Low Rotunda. University President Lee Bollinger was also in attendance.

More than 300 students were turned away for lack of space.

In introducing Bloomberg, School of International and Public Affairs professor Ester Fuchs—a member of Bloomberg's Sustainability Advisory Board and former Special Advisor to the Mayor for Governance and Strategic Planning—noted that local politicians like mayors are playing increasingly important roles in world leadership.

"London and New York have long been friendly rivals," Bloomberg said, before launching into a litany of links between the cities. "Both our cities have endured deadly terrorist attacks, and were hit at exactly the same time by what morphed into the biggest financial crisis in 75 years."

Johnson—who was born in New York before moving to Britain—followed Bloomberg with a spe=ech full of wisecracks, beginning with a laundry list of ways in which London was ostensibly superior.

"Far be it from me to rub in our success in winning the Olympic Games," he said to laughter from the audience, referring to the 2012 Summer Olympics, for which New York also made a bid.

After the panel, Bloomberg and Johnson moved into a cramped room in Low, where they signed a two-year tourism agreement intended to boost travel between New York and London. Under the agreement, each city will provide advertising for the other, and the respective tourist arms of New York and London will help each other hold publicity events.

According to a press release from the London mayor's office, Americans made almost two million visits to London last year, and the United Kingdom is the number one source of international visitors to New York.

"History is littered with British people who have come to New York and experienced tragic or comical results," Johnson said.

"There's an excitement about London that I think can take place in New York," Bloomberg added.

The conference also gave Bloomberg and Johnson a chance to compare notes on mayoral governance, and one British reporter pointed out that Johnson had spoken out against mayors serving more than two terms, as Bloomberg wants to do.

"Actually, I think I was talking about London," Johnson said.

"My point is, he probably said that before serving," Bloomberg lobbed back.

But both mayors were sure to emphasize how the futures of their respective cities, especially economically, were interconnected, even as they poked fun at one another.

Quipped Johnson, "You are our proudest creation."