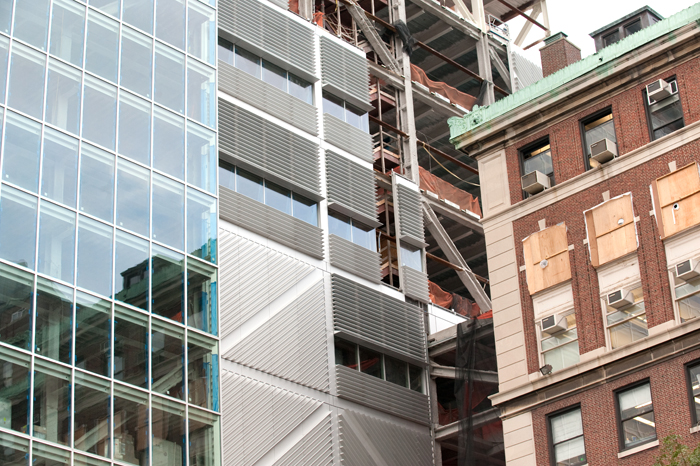 Despite what some may call an identity crisis, things are rolling along smoothly for the Northwest Corner Building construction, the University says. According to Columbia officials, the building process is still on schedule for fall 2010 occupancy. The Northwest Corner Building—briefly known as the Interdisciplinary Science Building before the administration recently changed its mind again in the hopes of attracting a wider array of donors—was topped off in December 2007, when the highest beam was raised. The building is supposed to house classrooms, faculty offices, and research facilities for chemistry, engineering, physics, and biology. It will also be another access point in and out of the main campus. "It's kind of awesome from the inside," Vice President for Arts and Sciences Nicholas Dirks said in an interview this summer. The building is intended to foster collaborative research among scientists and researchers in different scientific disciplines. It is fourteen stories high, found on Broadway and 120th Street, above Dodge Physical Fitness Center. "We hope the building will encourage the kinds of collaboration that have taken place anyway," Dirks added, noting that research will stress molecular processes and nanoscience. During the summer, construction finished installing the building's steel, and began to put up the curtain wall. "The facade installation should be complete by the end of this year," University spokesperson Robert Hornsby said. Next up is interior work: the building's laboratories, libraries, cafes, offices, and lecture halls are already under construction. Designed by Spanish architect Rafael Moneo, the Northwest Corner Building is slated to cost around $179 million. Hornsby said that Columbia has raised at least $50 million in outside funding for the building. According to the University Web site, the building will be 188,000 square feet. "Columbia University's need for additional space for scientific instruction and research facilities continues to increase," the Web site says. Still, it is unclear exactly who will be moving into the building, as well as what will become of the soon-to-be vacant offices on the main campus. Dirks said the University is engaged in a "long process" towards allocating the spaces that the moving scientists will leave vacant. Joy Resmovits contributed reporting to this article.