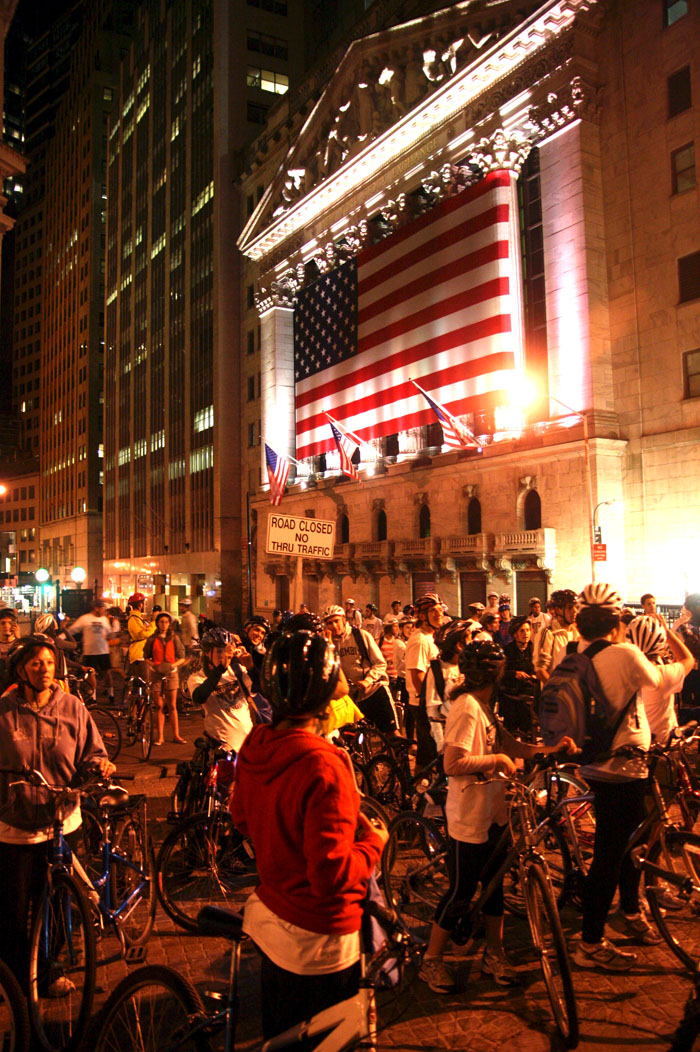 Two New York University girls—drunk ones, so it seemed—call out to us, "Why are you all riding your bikes?" "For a class!" we reply, rushing past and feeling the wind in our helmet hair. "I don't get that. I guess that's why I go to NYU," one says to the other. And then my friend hums, "Oh, who owns New York?..." This was the 35th Annual All-Night Bike Ride for the History of the City of New York class, taught by Kenneth Jackson, Jacques Barzun Professor in History and the Social Sciences. In a word—used at least once by each participant throughout the night—it was epic. Indulgent and extravagant, dangerous and obnoxious at times, this mass of around 250 people rode through the island of Manhattan in the wee hours of Friday morning, as if marking our territory. At 11:30 p.m., we gathered at the sundial to check in and put on our matching T-shirts with what seemed a nonsensical message: "You see them everywhere, Columbia bicycles, wise economy in every dollar, all-night bike ride 2009." Jackson wore his with bike shorts. I was wearing moccasins, for lack of better footwear. But we were just fine. A $20 trip fee covered repair equipment, spare tires, reflective vests for volunteer marshals, a van to transport busted bikes (or exhausted riders), an ambulance, and compensation for a chief assistant. All this came in handy when participants needed a quick fix or tire pump during the night. And after 35 years, Jackson reports only one injury—when a student hit a pothole in the Financial District, fell over her handlebars, and needed seven stitches in her chin. I had feared I'd be the victim of misadventure No. 2. But luckily enough, my moccasins (and bright white helmet circa fourth grade) served me well. Away we go. From College Walk, down Columbus, over to Central Park, we pedal out into increasingly black darkness. It's hard to see, caught in the flock of bikers riding along this path that Jackson has cleared for us over so many years. We stop at the beautiful fountain in Central Park. He says we'll pause every now and again, and he'll say something historic (about history, that is, though this trip itself is pretty historic to me). I don't think anybody is tired yet. Too exhilarated. The park is closed but not for us. Oh, who owns New York? Then we emerge, and here we are in Times Square. Everything there is wide awake and glimmering. Especially Lace Gentlemen's Club. The bouncer calls out to me, encouragingly, "Hey girl, you do your thing!" Times Square is filled with people. We are taking pictures of them and they are taking pictures of us. They shuffle out of Broadway theaters and see us making a spectacle. I'm blown away, and partly because I realize now I've made it into a chorus line of sorts: the pedaling feet of 42nd Street. From there, we head downtown, through the Village. We ride around the Washington Square Arch before leaving our bikes behind for a 2 a.m. snack break. My friend Ben decides he'd better go to Ben's Pizzeria but they don't give him a name-worthy discount. I hit the falafel stand. Meanwhile, a handful of students are waiting in Washington Square Park with the particular duty of watching our bikes. They get class credit for this. The rest of us don't. We're just in it for the ride. So we hit the road again, heading southeast, over to Wall Street. Wary of cobblestones, I weave over to the paved sidewalk. So much history here, but wouldn't you rather smooth things over just to be safe? A history lesson learned. At last we arrive at Federal Hall, the site of George Washington's first presidential inauguration on April 30, 1789. Now, Jackson is standing there, in a bike helmet. He tells us why this place is so important. I can hardly hear him, and my tired 4:30 a.m. eyes can hardly stay open, but in this sleepy blur I catch myself imagining that I'm there, imagining Jackson is Washington and we're getting ready to start this new republic. Rather, we're getting ready to ride over to Brooklyn. We pedal on until we reach the bridge. "I'd like you to walk your bikes, slow down, and enjoy the view," Jackson tells us. It's gorgeous. Just a few blocks over, we ride to a park and then to the Brooklyn Heights Promenade, overlooking the East River. It's about 6 a.m. We all stop in our tracks and breathe in the waterfront air, looking out at the island across the way. Oh, who owns New York? After a while, I turn to find people gradually heading home—some go by subway and others, whether out of guts or foolishness, ride back. Jackson seems to have disappeared into the sunrise. My body aches, and my friends and I make our way back to campus. By 6:30, I'm ready to fall into bed when I get a call from my friend who says he just saw professor Jackson on College Walk. Too exhausted to be as flabbergasted by this sighting as I probably should be, I turn off my phone and dream in black and white, to the music of Gershwin's "Rhapsody in Blue." news@columbiaspectator.com