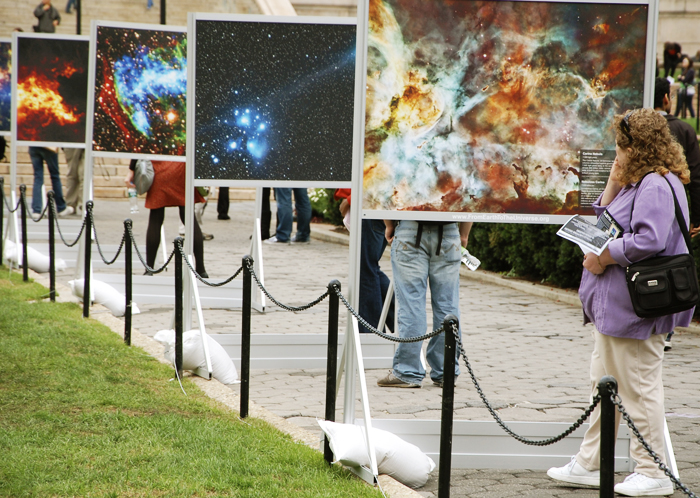 Students pause outside Butler to marvel at the artistry of the cosmos on opening day of the Earth to Universe exhibit.

Outer space has landed on Columbia. Monday launched a two-week astrophotography exhibit called "From Earth to the Universe" to celebrate the International Year of Astronomy. The University is showcasing scenes of the universe accompanied by scientific descriptions. Through Oct. 12, images of galaxies, nebulae, and other astronomical objects are on the walkway between Butler Library and the sundial in 24 double-sided 3-foot-by-3-foot displays. Due to its outdoor location, the exhibit will be open 24/7 during its first week. According to Cameron Hummels, a Ph.D. student in the astronomy department and director of the its outreach program, the department is staffing a table from 9 a.m. to 7 p.m. every day while the exhibition is outside. These volunteer astronomers are handing out NASA educational materials such as posters, pictures, magnets, DVDs, etc. and will answer any questions about astronomy or science. Hummels also noted that "we're planning to give out some really cool prizes to people who can 'Stump the Astronomer' with very good or challenging questions." In addition, the astronomy department has a few telescopes set up for people to see how they work, according to Hummels. One telescope will have a solar filter on it that will allow students to observe the sun. These exhibits are meant to "show the connection between science and aesthetics," he said. This is one of many astrophotography exhibits that the International Astronomical Union has organized either to be set up permanently or to travel around the world for the year. Hummels noted that this exhibit just came from the National Mall in Washington, D.C. and wil travel to Puerto Rico in November. "Originally, Columbia was planning to host it for the entire month of October, but in an unfortunate surprise move, the administration whittled that down to one week of outdoor time about two months ago," which occurred "after seven months of talks with administration officials indicating that they'd host it for a full month," he added. "It's too bad really that the administration is paying nothing to get this here, and yet they won't let us put it up for more than a week," Hummels said. "They're actually charging the astronomy department ... they almost succeeded in blocking it entirely," he added. Yet the University tells a different story. According to a spokesperson for Student Administrative Services at Columbia, the "University stakeholders have worked diligently with the astronomy department to help bring the 'From Earth to Universe' exhibit to the Columbia community." "Highly complex logistics associated with the exhibit had to be addressed, including security of the large installation, safety issues, traffic control, and the increased demand for and fair allocation of outdoor space," the office explained in a statement, adding, "We are glad that a solution was reached to bring this fascinating and beautiful exhibit to campus, in a safe and reasonable manner." According to Hummels, this will be the exhibit's only extended period in New York. It was on display for one day in Washington Square Park in June of this year. The main goal of the project, according to Hummels, is to "bring beautiful multi-wavelength images of the cosmos to a wider audience in nontraditional venues such as public parks and gardens, art museums, shopping malls, and metro stations." Monday afternoon, after the exhibit had been set up for only half a day, an estimated 1,250 people stopped by, according to a tally clicker at the astronomy table. Hummels said that he is "very happy with how the exhibit manifested" and that there has been "a lot of interest" so far. Jenna Lemonias, a graduate student in astronomy who was volunteering at the table, agreed that there have been "lots and lots of people" to stop by so far and that she has had "lots of good conversations" in her time staffing the table. Students are also very impressed by the exhibit. Cathy Greenman, CC '12, said she feels Columbia is "so lucky" to host this exhibit. She believes that the images are an "amazing testament to human achievement, especially considering what Galileo did 400 years ago." news@columbiaspectator.com