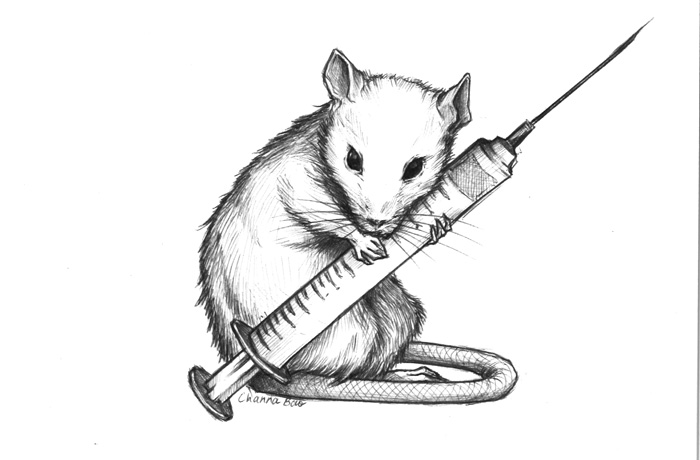 In 2002, PETA was contacted by a veterinarian working in the laboratories at Columbia University. Dr. Catherine Dell'Orto said that animals in Columbia's laboratories were mistreated and denied basic post-surgical care, pain relief, and adequate veterinary care. Dr. Dell'Orto first submitted documentation to Columbia's IACUC, but was ignored. Six months later, Columbia announced that it had concluded an internal investigation of the allegations of abuse, but the problems reported by Dr. Dell'Orto were dismissed as simply the result of poor record-keeping of animal charts. Columbia did not release its report to the public, but thanks to the Freedom of Information Act, PETA secured a copy of the report which showed that Columbia's investigative committee had uncovered evidence of inadequate veterinary care, corroborating Dr. Dell'Orto's allegations: Six baboons used in painful and invasive stroke experiments were determined to have received inadequate or questionable veterinary care. The committee's report acknowledges the baboons' extensive suffering. The note for Baboon B777 reads, "Surgery was performed on September 18, 2001. The records show that the animal did well on September 19, but that on September 20 the animal lacked physical alertness, was unable to sit upright, or to eat. On September 21, the records indicate that the animal was awake and motionless but unable to eat, and could only drink water if squeezed into its mouth. It had vomited in the morning. The animal died while in its cage on September 21, 2001 at 1:30 p.m." Three other baboons died in their cages, even after their clinical records indicated lack of motion, poor motor skills, and an inability to eat. Following an invasive experiment in which rabbits were given skull injuries, one rabbit who may have been blind developed recurring seizures. Eight days after the debilitating surgery was performed, the rabbit was finally euthanized. A dog who had been used in cardiac experiments was found two days after the surgery to have developed paralysis. Three days later, the dog was "lethargic, vomiting, paralyzed, and in renal failure." Experimenters waited two additional days before finally euthanizing the animal. Another dog used in the same set of experiments became paralyzed in his hindquarters and was left in chronic distress for 27 days before finally being euthanized. Students deserve to know what happens inside the laboratories at their school, and I encourage all Columbia students, staff, and faculty to attend the Testing One, Two, Three forum at 6:30 p.m., Oct. 8 in the Satow Room of Lerner Hall. Free tickets are available in the Lerner Box Office. People of all opinions, backgrounds, and beliefs are encouraged to attend. The author is a laboratory oversight specialist in the Laboratory Investigations Department of People for the Ethical Treatment of Animals (PETA).