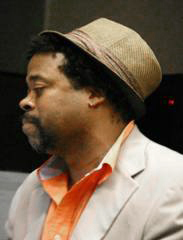 Courtesy of The Center for Jazz Studies

His voice has already been heard in the Village and beyond, and now Greg Tate is striking the right note at Columbia as the Louis Armstrong Visiting Professor at the Center for Jazz Studies. Recently dubbed one of "the Godfathers of Hiphop journalism" by The Source magazine, Tate is much more than just a music journalist. His commentary on culture and politics has been published just about everywhere from The Village Voice to Vibe to The Washington Post. He has also published several books including "Flyboy In The Buttermilk: Essays on American Culture," "Midnight Lightning: Jimi Hendrix and The Black Experience," and "Everything But The Burden: What White People are Taking from Black Culture". Recent Louis Armstrong Visiting Professors include such luminaries as William Lowe, Laura Johnson, Gwen Ansell, and Germany's Wolfram Knauer. Professor George E. Lewis, the Director of Columbia University's Center for Jazz Studies, describes the Armstrong Professorship as "an opportunity to present the University community with diverse and trenchant new scholarly perspectives on African-American musical culture in general, and jazz-identified music in particular," adding that faculty as well as students had inquired about the possibility of Tate visiting this semester. "His [Tate's] understanding of African-American music is both broad and deep, encompassing multiple genres and genre-crossing in both traditional and experimental musics," Lewis said. "His interdisciplinary contributions to writing on black popular musical culture have been seminal." Humbly, Tate admits to having felt some "trepidation" after accepting the venerated post. Nevertheless, he appears to be both succeeding in and enjoying his first attempt at formal teaching. This semester, Tate's course, "Black Art and Consciousness," looks at the relationship between music and politics, and how music has given coherence to the black community in America since the 18th century. Those who missed the registration deadline for the class might still have a chance to learn from it­­—Tate mentioned that the curriculum may generate another book. On whether or not music plays a role in politics today, Tate, shaking his head, said, "There is not a lot of music being made now that really tackles tough political questions. That which does is really underground." With few exceptions, music today has indeed fallen quiet in the political realm. But why? To Tate, the jazz of the 1970s was a "strident, militant, socially-aware form of music." Then, over the course of the last several decades, popular music piped down as the "technocrat, bureaucrat, investment banker mentality took hold of the artists themselves." When it comes to politics, Tate added, "Silence is as loud as a shot." Meanwhile, Tate has kept busy outside of the classroom, continuing to work with his band Burnt Sugar, with shows scheduled throughout the coming months. According to Tate, the band's forthcoming album will emphasize vocals and combine indie rock with R&B. Not least of all, at the Louis Armstrong Lecture on Oct. 21, Tate will discuss his upcoming book on the cultural legacy and life of James Brown. Scheduled to take place in Philosophy Hall, the lecture is both free and open to the public.