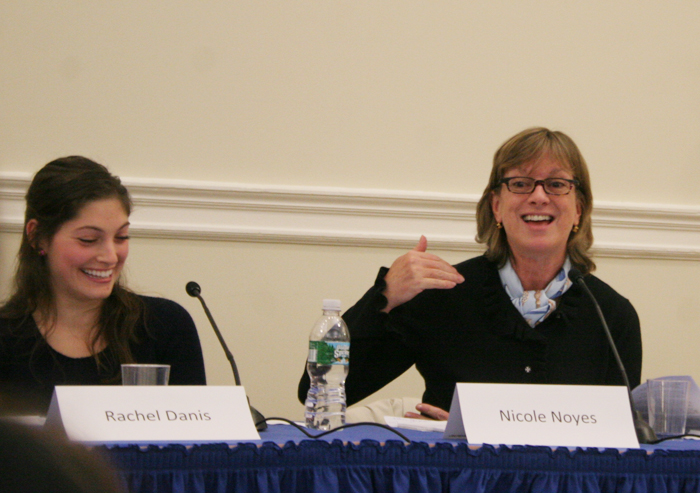 At an event Monday night, Barnard President Debora Spar noted that egg donations are not simply charitable giftsthey come with a sizeable reimbursement. But there are other kinds of costs.

Eggs are for sale, and they're a precious commodity. For women, this is a question of "blessing or business," as the title of an egg donation panel at Barnard Hall asked Monday night of this controversial—and, in many cases, emotional—issue. As Barnard President Debora Spar noted, the term "donation" is somewhat of a misnomer. "You can call it a donation, but there's not a lot of donations I know of for which you receive $15,000," she said. Moderator and organizer Aditi Shankar, BC '11, defined egg donation as "the process through which a woman provides one to several of her oocytes for the purpose of assisted reproduction or research." According to Shankar, egg donation has rendered about 47,000 births to date and produces $38 million dollars per year. Donors typically receive anywhere from $4,000 to $25,000 per egg. The price for the eggs of donors who give through an agency, which selectively chooses the women whose eggs it offers to recipients, tends to be on the higher end of this spectrum. Eggs donated for vitro fertilization were at the forefront of discussion for the mostly female crowd. These eggs hold the promise of birth and motherhood for single or infertile women, single men, and homosexual couples. In addition, the panel addressed donation through an agency rather than directly through a medical center; the health and psychological issues involved in the egg donation process for the donor, the recipient, and the child; and the political issues surrounding potential government regulation of the fertility market. Panelists included Spar—author of "The Baby Business: How Money, Science, and Politics Drive the Commerce of Conception"—and civil rights attorney Kathryn Kolbert, director of the Athena Center for Leadership Development as well as cofounder and former vice-president of the Center for Reproductive Law and Policy. In 1992, Kolbert testified on a woman's legal right to reproductive choice before the Supreme Court in Planned Parenthood v. Casey. Another panelist, Rachel Danis, BC '10, is a psychology major who hopes to go to medical school. She interned at the Center for Reproductive Medicine and Infertility at Weill Cornell Medical College this past summer, observing the process of egg donation first hand. She remarked on the donor recruitment advertisements seen around campus, many of which target Ivy League students who would donate the trait of intelligence, a commodity in the fertility market. These ads can draw in students who pay high tuition and may find egg donation a compelling source of income. "What is absent from these ads are the health risks and psychological effects," Danis said. "These are the same issues that surround abortion and childbearing decisions," said Kolbert, who spoke extensively of the political, ethical, and legal challenges facing the fertility market. "They are especially relevant to young people, and they raise fascinating questions that are worth exploration." news@columbiaspectator.com