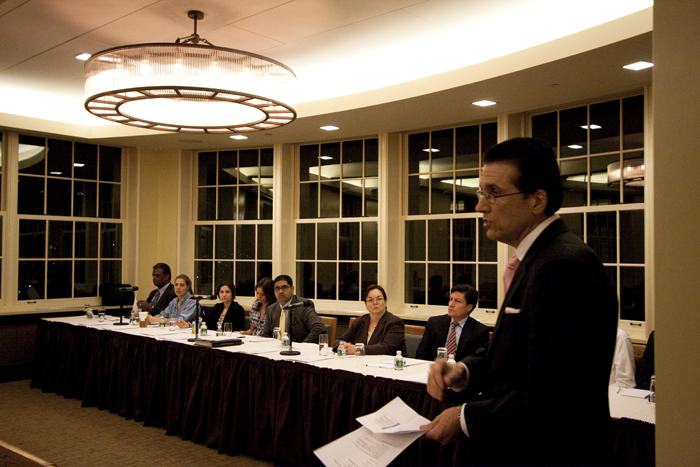 Though the recession left Columbia with fewer funds to invest, a concerned group is still keeping a close eye on the money flow. These concerned individuals met at a town hall on Tuesday night, where four proposals were submitted to Columbia's Advisory Committee on Socially Responsible Investing (ACSRI) during its annual open meeting at Faculty House. The Committee was established in March 2000 to advise the University Trustees on ethical and social issues that might arise in the management of the University's endowment. The purpose of the town hall was for members of the University to voice their opinions by presenting proposals that could be submitted to the Trustees for approval via ACSRI. Undergraduates dominated the meeting, while only four graduate students, one faculty member, one staff member, and one alumnus attended. Jack McGourty, Associate Dean of SEAS, started the discussion by describing the mandate of ACSRI as being an advisory body for the Trustees rather than a policy-making entity. "We don't dictate where the money goes," he said. "We serve as your voice." Following the introduction, four students presented proposals to the Committee. The first proposal, called "Divestment from Arms Manufacturers," was presented by Lillian Udell, CC '10, a student representative from Columbia Coalition Against the War. Udell's proposal included a recommendation that Columbia abstain from investing in corporations that produce cluster munitions or key components for the munitions. Udell defined cluster munitions as "weapons that when launched scatter smaller bombs over an area that can be the size of several football fields." They are "designed to explode upon impact, but they often fail to do so, rendering the contaminated land unsuitable for civilian use." Udell said that these munitions have a 98 percent civilian death rate when they are used. A panel member informed the group that the University already has a tobacco policy that is similar to this proposal, which could be mirrored by this. The Responsible Endowments Coalition (REC) at Columbia introduced the next few proposals. Cecilia Schudel, CC '13, Alberta Wright, BC '10, and Moses Nakamura, CC '13 presented the first of these which called for transparency and recommended a method for benefactors to donate funds to the University for campus events. The students said they believed that Columbia affiliates and local residents should be able to access information about Columbia's investments. Columbia should also consider more ways to give back to the local community, they said, suggesting events that benefit both students and the neighborhood, which could be paid for from the recommended donation funds. Another REC proposal presented by Karman Lucero, CC '11 and Amelia Youngstrom, BC '12 focused on positive investments, which are deemed both ethical and profitable. The last REC proposal, introduced by Jennie Halperin, BC '10, suggested the implementation of a model to achieve consensus among those concerned with and those deciding Columbia's investments, "a general agreement of all people involved in the decision-making process." The proposal stressed the difference between democracy by voting and consensus by discussion. "Not everyone is going to agree, not everyone is going to get their voice heard. This model will let everyone be generally okay [with the solutions made]," she said. During open forum, an attendee asked if the University has changed its investments because of the economy. Anne Sullivan, the Executive Vice President for Finance responded by saying that even if investments were changed, "We don't compromise our principles in times of greater economic need."