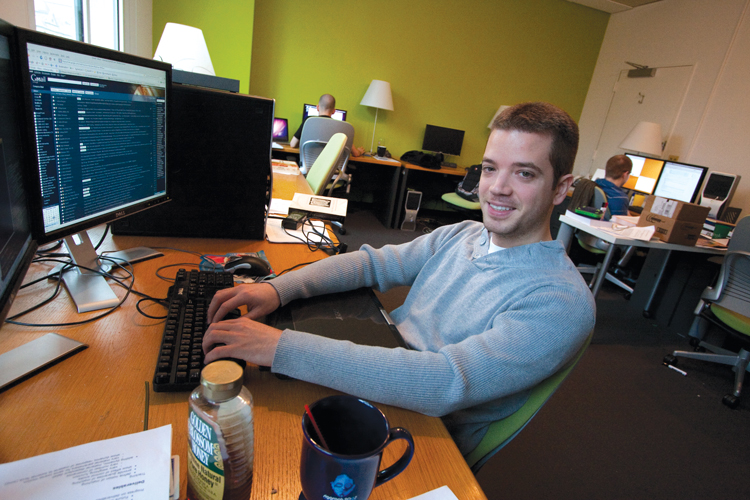 Study your physics—it may be the key to a video game dream job. Late last spring, Miklos Bergou, GSAS '10, was one of 26 students worldwide to be awarded the prestigious Intel Ph.D. Fellowship for work on his thesis in computer graphics, Intel announced recently. Bergou came to the Columbia Graduate School of Arts and Sciences in 2005 after completing his undergraduate degree at Carnegie Mellon University, where he double majored in physics and computer science. He explained his knowledge of both fields has been vital to his computer graphics research. While some computer graphics designers focus on the way objects look on screen, Bergou is interested in the way things move. He has managed to simulate the motion of fur, hair, and cloth in more realistic and innovative ways. "A lot of it is based on physics," Bergou explained. "To be able to make things look like they're moving realistically, we have to be able to understand how they move in the real world," he said. Kevin Egan, GSAS '10 and one of Bergou's collaborators at Columbia, remarked, "Miklos has a very rigorous physics background, but he's also adept at making clever shortcuts and tricks that have a huge practical benefit for the film and video game industries." For Bergou, computers have been a lifelong fixation. "We always had computers around the house, even when I was little in the '80s," he said. He used them mostly for games, but even then he was honing his computer science skills. "There was a magazine where, instead of buying the game, you'd buy the magazine, and the magazine had the source code to the game," he explained. At a young age, he would spend hours entering the source codes for games so that he could play them—the beginning of an enduring graphics fascination. Professor Eitan Grinspun, Bergou's thesis advisor, described Bergou as "soft-spoken, a gentleman, and a pleasure to work with. He takes the time to help those around him, and he is humble, even though he has many well-deserved reasons to be proud." Bergou's favorite undergraduate professor from Carnegie Mellon, Doug James, now teaches at Cornell. When asked if he could see his own influence in Bergou's current research, James remarked, "Gee, more likely the other way around." James and his colleagues use Bergou's innovations in their own research on simulating knitted cloth. Organizers at the Intel Fellowship program stress that the award is not just meant to provide financial support, but to also foster strong collaboration between Intel and the students who are "inventors of the future," according to fellowship program manager Justin Rattner. Bergou said he is excited about the opportunity to work with Intel. The collaboration is one of several for his research group, which is already working with some of the biggest companies in graphic design. They include some of the well-known movie animation studios and Adobe, which has worked with his group on the development of emerging technologies. Bergou values collaboration with those sorts of corporations because it gives the group a chance to get some of their work out into the industry. "They give us new ideas," he said. "When they have something they're not able to solve, that could become a new research project for us." When he graduates in May, Bergou said he would like to work in any industry that deals with physical simulation—especially special effects for film studios. "Various companies have expressed interest in hiring him," Grinspun said, "But he is keeping options open at the moment."