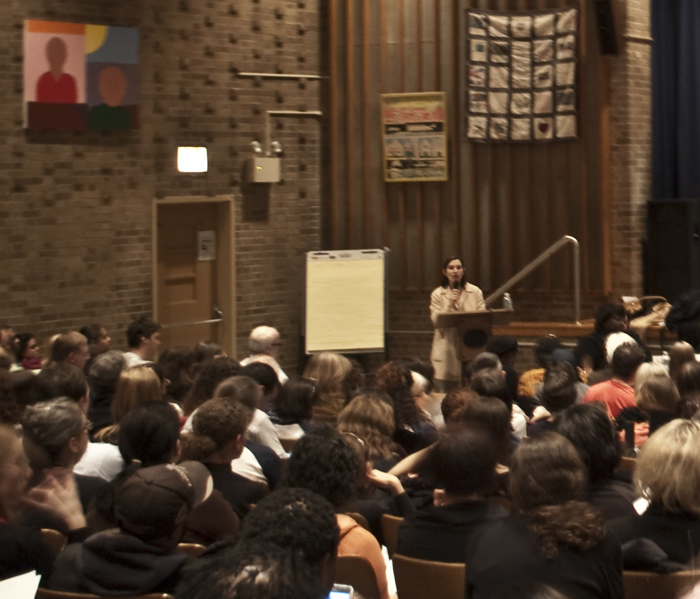 An audience member touches on the problems inherent in local charter schools.

Harlem is the battleground for charter school wars. This was the theme of the Community Education Council meeting on Jan. 20 for Manhattan School District 3, which includes Upper West Side and West Harlem schools. Parents and school officials who attended the meeting at P.S. 242 on 122nd Street expressed anger over the inequalities between charter schools and traditional public schools which often share building space. It is a particularly contentious issue in Harlem, where parents said that public school space has been reduced to bring in charter schools, which are public schools accountable to the Department of Education, but run by an outside not-for-profit board. Some opponents said the charters were unfairly receiving more space and resources. "My children go to the gym in a box, eat lunch in a box. There are no windows," said P.S. 149 parent Sonya Hampton, adding, "We need to stand up for what's right." Elizabeth Rose, director of portfolio planning for the Department of Education, fielded questions and concerns from the council and neighborhood parents. Rose said that the DOE is working with Manhattan Borough President Scott Stringer in a series of "war room" discussions, in which different parties were brought together to find solutions to the overcrowding problem. Discussion about overcrowding on the Upper West Side centered on increased enrollment, while the debate about schools above 110th Street surrounded the rising charter school tensions. Of 29 Manhattan charter schools listed on the New York City Charter School Center's website, 24 are located north of 96th Street. Rose said that representatives from schools that share space met in December, and recently launched group walk-throughs of schools to assess space divisions. "We've been taking hours going through these schools, opening closets, opening maintenance rooms looking for space," she said. Noah Gotbaum, president of the Community Education Council, said he just wanted to ensure a level playing field when schools share space. "We know you can't put five schools in and make them work equitably," he said. "A lot of our public school students are coming last." LaShawn Pressley, PTA secretary at P.S. 242, said, "As a Harlem school parent, I don't know how the DOE will expand charter schools when they're not diligent in giving to public schools. It seems that they're favoring charter schools but turning around and saying you're just as important," she said. Rose responded that the standards were the same for opening a district or charter school. "We use the same standards to site schools of all types DOE schools get funded based on enrollment—enrollment goes up, and resources go up," she said. New York State Senator Bill Perkins, who represents parts of Harlem, spoke at the meeting, saying that the tensions are rising. "It's important to me that the charter school problem is addressed. It's an uptown phenomenon, where we have charter school wars Incumbent parents at schools that had the intent to expand are now at war with their neighbors," he said. One Harlem public school teacher, who requested anonymity to protect her job, cast blame directly on the DOE. "The problem is more with the DOE than the charter schools Over the past four to five years in Harlem schools, the DOE has decreased enrollment, taken away programs, and then come knocking with charter schools, saying 'you've got all this extra space,'" she said. Gale Brewer, a New York City Council member who represents the Upper West Side, said in an interview that though she doesn't have any charter schools in her district, between West 54th and 96th Streets, it's still a concern. "The issue of space, taking over public schools, it's a killer for public schools. They say they don't have money for space but they shouldn't be taking over," she said. Rose said that the DOE is ready to host another uptown "war room" as soon as possible. "By the way, we do agree with those parents who would like to rename them 'peace talks," she said. "We're all trying to get the same things done." sarah.darville@columbiaspectator.com