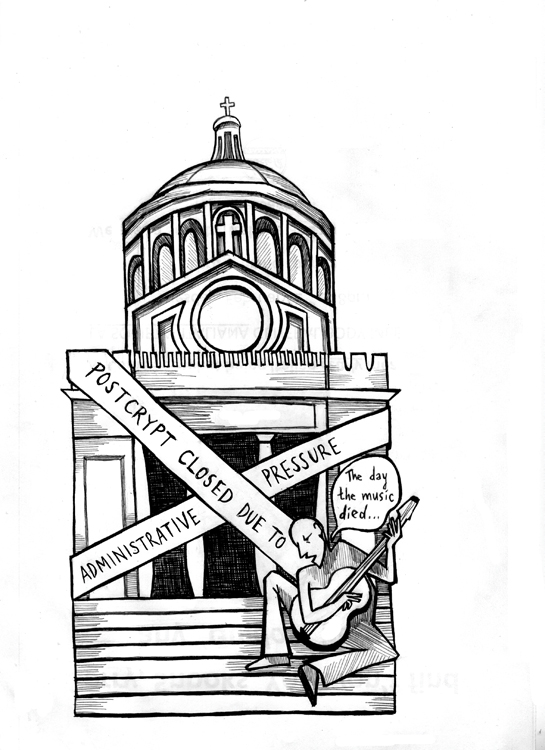 It's not just the world-class professors, cutting-edge research, and motivated student body that put Columbia on the map. Hidden deep in the basement of St. Paul's Chapel lies a gem of the folk music world and an important asset to the University: Postcrypt Coffeehouse. Since 1964, when it was founded by then-University Chaplain John Cannon, Postcrypt has been run completely by dedicated student volunteers, hosting free all-acoustic concerts every Friday and Saturday. We are able to do our part to support live music through revenue from our bar and funding from the Student Governing Board. Postcrypt is frequented by both students and community members, and as such, it represents a powerful connection between the University and the Morningside Heights community. Now, because of circumstances that have unfolded over the past two months, we are worried that the proud tradition of Postcrypt will not be able to continue as it has in the past. In December, the managing board was first confronted by Public Safety and University Event Management, calling for changes to be made to our weekly events. Administrators have privately acknowledged that these first meetings were called after an anonymous comment on Bwog accused Postcrypt of serving alcohol to underage students. We were informed that we would be required to staff a security guard each night and would have to pay for two alcohol proctors instead of one. The Securities Fund, controlled by the three student councils, declined our application for funds to cover the extra expense of the security guard, which comes to $218 per night. They declared it an unnecessary expense, and one that, with the frequency of our events, would quickly drain a fund that is supposed to equally cover all student groups. Faced with these new and astronomical costs, we quickly became worried. Until now, nightly expenses included one alcohol proctor, at $80, and a temporary beer and wine license, at $36, for a total of $116, a cost covered by our bar revenue. Now, with the security guard and two proctors, the sum rises to $414 per night, which is completely infeasible for us to pay while also maintaining the regularity of our performances. Last week, the Office of the University Chaplain made the decision that all events taking place in the evening in St. Paul's Chapel will be required to staff a security guard. This means that even if we don't serve alcohol, and therefore lose much of our revenue, we will still have to cover the $218 per evening. The guard will be charged with patrolling the whole building to make sure it is safe. Although Public Safety offices are located just across from the chapel and about a one-minute walk from Postcrypt, we were told that the chapel was still not safe. However, there has been no history of incidents that would require the intervention of a Public Safety officer at Postcrypt events, so this new imperative seems unnecessary. Furthermore, a student building manager is already on duty each night, and part of his job includes walking around the chapel one to two times per hour. I do not know of another group that is required to pay for a Public Safety officer to monitor the entire building in which their event takes place. If the University truly thinks that keeping the chapel open on weekends is a safety concern, they should either pay for the guard themselves or add the chapel to the patrol route of the officers on duty during the evening. Either way, the University should be footing the bill, not passing it off to either student groups or the Securities Fund. The addition of a second alcohol proctor is another unnecessary demand. As it stands, our proctor sits at the door, giving out wristbands and monitoring activity at the bar. According to members of the Office of Student Group Advising, the second proctor will sit on the other side of the room to watch the audience and to ensure that no one leaves through the second door with a beverage. We offered to have a student do this job for free, but we were informed that it required a second proctor. In a space as tiny as Postcrypt, even the alcohol proctors themselves admit that this is ridiculous. Considering all of the perfect reports we've received from proctors, University Event Management should understand that a second proctor would prove redundant. Since the situation with Postcrypt has received press on Bwog and in this newspaper, administrators have begun to assure us at meetings that they are not trying to shut us down, even as they continue to make unreasonable demands. The fact of the matter is that, if Postcrypt is forced to cover the new costs that have been imposed, it will no longer have the financial means to function in the manner it has for nearly half a century. The author is a Columbia College senior majoring in art history. She is the head manager of Postcrypt Coffeehouse.