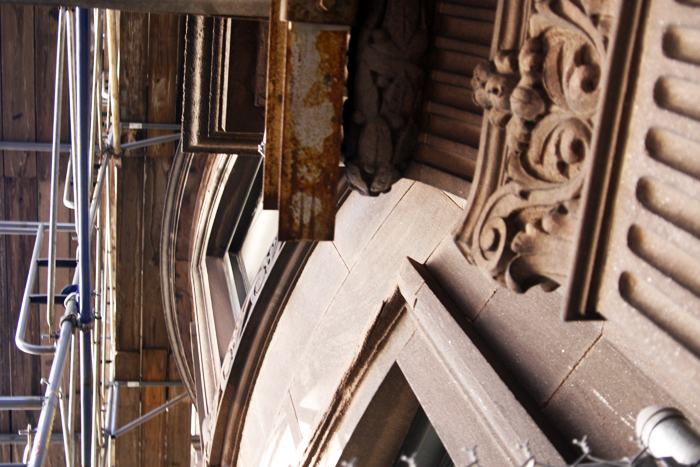 The University is preparing to demolish three brownstones on 115th. Preservationists say it will be a major historic loss.

Though Columbia already has the permit to demolish three brownstones deemed historic by the state, neighborhood preservationists said on Thursday they are not giving up without a fight. Community groups and local politicians met Thursday night to discuss ways to halt the impending demolition of three Columbia-owned brownstones on 115th Street, between Amsterdam and Morningside Drive. Around 50 people, including representatives from Congressman Charles Rangel, Council member Inez Dickens, and Assembly member Daniel O'Donnell, attended the meeting at 54 Morningside Dr. The event was sponsored by the Committee to Preserve the Morningside Brownstones, which formed in opposition to the demolition of the brownstones located at 408, 410, and 412 115th Street. Columbia obtained a demolition permit from the New York City Department of Buildings on Nov. 30, 2009. Shane Seger, communications director for O'Donnell, who represents Morningside Heights, said, "Because Columbia has the permit for demolition, the only thing we can really do right now is appeal to the Landmarks Preservation Commission and request a hearing. Morningside Heights is not a historically protected neighborhood, so unless the LPC can step in, there is nothing we can do to stop the demolition." The brownstones are currently shrouded in scaffolding and black netting, and local preservationists argue that their destruction would be a huge loss to the neighborhood. The New York State Historic Preservation Office—which lists building candidates for the National Register of Historic Places—deemed the buildings historic in December 2008, but the New York City Landmarks Preservation Commission, which has legal authority, has not acknowledged the structures. Currently, the CPMB is engaged in a letter-writing campaign to the city's Landmarks Preservation Commission. "They're not just any old buildings. They're part of the historic fabric of this community," said O'Donnell, a longtime opponent of the demolition. "They predate Columbia, they have been deemed historic by the state, and they are solid and well-built. They should be revitalized and reused," he added. O'Donnell has also for years lobbied for Morningside Heights to gain status as a landmark district. Rod Richardson, CC '84, who lives close to the brownstones, said, "The buildings are beautiful, if you could just see them under the tarp." "If Columbia gave us an agreement that said they wouldn't go higher than six stories, they would match the architecture of the neighborhood, and they would keep the facade, I might be okay with that. However, they haven't given us that agreement, so right now God knows what will replace it," he added. In December 2009, Director of Communications for Columbia Facilities Daniel Held wrote in an e-mail, "The University has had meetings with the local community, including the 116th Street Block Association, and local elected officials to discuss our plans." The University has also maintained that the buildings are in a state of disrepair. Held said in an e-mail on Thursday that the University has no new comment in response to the meeting. In December, he also said, "We do not have a firm schedule for demolition or specific development plans for the site at this time." Even though members of the CPMB recognize that Columbia has permits in hand, they said that they were not willing to concede to the demolitions just yet. "We want to make sure the community knows that we want to save those brownstones," said CPMB leader Harry Schwartz, who is also a representative from the 116th Street Block Association "We know that Columbia could show up with a wrecking ball and bulldozers tomorrow, but until that happens we will not stop fighting for the preservation and renovation of these buildings." nicholas.bloom@columbiaspectator.com