No gender-neutral housing for 2010

No gender-neutral housing for 2010 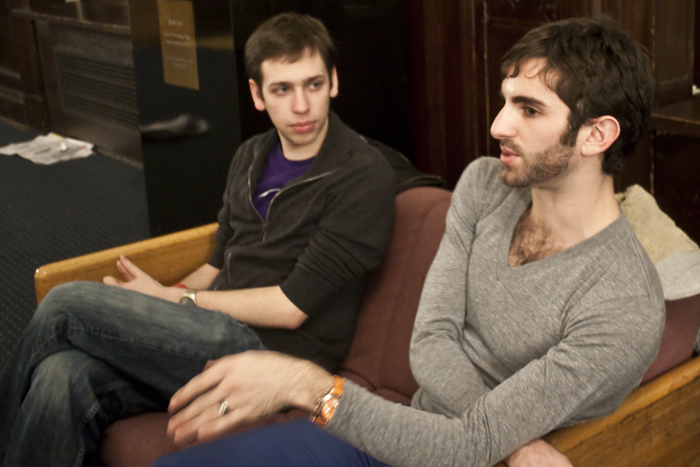 Avi Edelman, left, and Sean Udell, right, are frustrated with the administrations surprise hold off on gender-neutral housing.

When the housing lottery opens in March, gender-neutral housing will not be an option. On Thursday, Dean of Student Affairs Kevin Shollenberger and Dean of Community Development and Multicultural Affairs Theresa Martinez said that gender-neutral housing—which allows for mixed-gender doubles—will not be available for the upcoming year. The announcement came as a surprise to students who worked on the proposal and expected the administrators to adopt the policy. Shollenberger said the administration is seriously considering a pilot program for the 2011-2012 school year, which would be part of the 2011 housing lottery. Though the details of the potential program are not yet clear, he said, based on similar programs at peer institutions, likely only a small number of students would choose to participate in the program. He said they hope to have a concrete plan by the fall. If the pilot were implemented and were successful, then some sort of gender-neutral housing policy could be implemented for the 2012-2013 year. Miranda Elliot, president of GendeRevolution,Sean Udell,vice president of the Columbia College class of 2011 and treasurer of the Columbia Queer Alliance, Avi Edelman,president of Everyone Allied Against Homophobia, and Sarah Weiss, policy vice president for Columbia College Student Council, co-authored the gender-neutral housing proposal last semester. CCSC, the Engineering Student Council, GendeRevolution, CQA, and EAAH presented the proposal to Columbia administration in the fall. In their proposal, the option would not be open to first-years. "We have looked over the proposal very seriously and Dean [Michele] Moody-Adams, Dean [Feniosky] Peña-Mora, and myself thought it had a lot of merits," Shollenberger said, but, "We've decided not to make changes for this year's lottery." Shollenberger explained that administrators want to make sure they have time to have a "larger community conversation" in the spring. They also want time to fully incorporate any change into the housing lottery, as well as into brochures and tours, before enacting the change. They have been researching the gender-neutral housing policies of about 30 peer institutions, he said, noting that Columbia already has coed floors and suites, which some other colleges actually consider gender-neutral housing. Edelman said the decision was particularly frustrating, because they were working under a timeline that the administrators had suggested. "We certainly felt that it was ready to go," Udell said. "We had our expectations raised but not met," Weiss said, adding that she and other supporters had thought the policy would pass. She added, "Eventually this will happen." Furthermore, "A pilot program will allow us to get all the kinks out," she said. Over the next semester, the administration said they plan to communicate with the student body through possible town halls and forums, to discuss how to implement a potential "open housing" plan—their preferred term for any potential gender-neutral policies. Shollenberger said the emphasis would be on allowing students to live with whomever they are most comfortable, and not for couples to live together. Peer institutions with gender-neutral housing do not see any abnormal roommate issues, he said. Martinez added, "It has more to do with people's comfort around sexual identity and selecting their own roommates." "We look forward to further engaging with students on this matter and to making a thoughtful decision in the best interest of our community," Columbia College Dean Moody-Adams and SEAS Dean Peña-Mora wrote in a joint statement. Administrators said that a student task force to help develop the pilot program is in the works. "This is something that most people were really pushing for, and that people were really behind," said Whitney Green, SEAS '10 and president of the Engineering Student Council. She said that the council plans to "identify what key issues we need to address again" and be more thorough about what needs to be done. "These kinds of processes take a significant amount of time," Green said. "Columbia doesn't change overnight." But many students said they felt the administration had not done everything possible to make the change happen this year, and added that some students will suffer for it. Edelman said that the proposal stated that supporters were willing to do everything possible to reach out to students and to make the change happen this year, but claimed administrators did not take up that offer. Udell agreed, saying, "We haven't heard anything from the administration until now," he said. "What is unfortunate is that you have this situation where you have a lot of students who took this proposal as what is going to be the policy next year." This decision could be problematic for some students who had planned on living with the opposite gender next year, he said. "There are students that are not going to find those comfortable living spaces next year," Edelman said. Students not affiliated with the proposal also expressed disappointment with the decision. "I was going to live with one of my best friends who is gay," said Sydney Shaefer, CC '12, who is now hoping to get a single in Broadway. Shaefer added, "I hope they eventually will let it happen. I think for upperclassmen it is definitely a good idea." Jeanette Clark, CC '10 and past-president of the Columbia Queer Alliance, said, "I'm extremely disappointed ... A lot of people who I worked with very closely over the past four years who helped put it together ... will not see it get passed or implemented in their time." But some students still have reservations about the actual plan itself. Michel'le Forrest, SEAS '12, said, "I think it's definitely the administration's place to make sure policies that get passed on this campus benefit everyone, and if they didn't pass it, that's their decision." Leah Greenbaum contributed reporting to this article. amber.tunnell@columbiaspectator.com