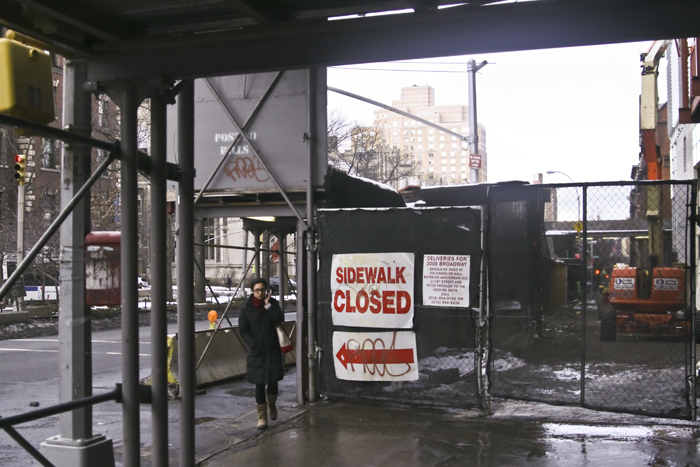 Construction sites may soon be redesigned with a new NYC sidewalk shed plan that replaces eyesores with colorful structures.

The city is designing a new umbrella, but this invention will protect New Yorkers from a lot more than just rain. On Jan. 21, Mayor Michael Bloomberg, with the New York City Department of Buildings and the American Institute of Architects, announced "Urban Umbrella," a new design for the city's sidewalk sheds—the enclosures that cover sidewalks while construction is being done on a building. Sheds protect pedestrians from construction activity on scaffolding above them. These basic plywood-and-metal boxes are located at construction sites citywide, and locally, these structures continue to fill a large, three-year development project on Columbus Avenue between 97th and 100th streets. According to sketch renderings, the new design has arching metal bars that meet to form a colorful ceiling in a structure resembling an umbrella. Marc LaVorgna, spokesperson for the Office of the Mayor said the design would improve pedestrian traffic and be more aesthetically pleasing. "The new design will increase the amount of usable sidewalk space, decrease the opportunity for people to walk into poles, and create less impediments on the sidewalks," he said. "It looks better, covers up less of the buildings, which is attractive for store owners and will be cheaper in the long run because the materials will last longer." But for some neighborhood residents, the shed's appearance is a secondary concern. After a crane accident caused part of a sidewalk shed to collapse in October 2009 at the Columbus Square project on 97th Street, local community groups held a forum with the Department of Buildings to address safety concerns. Paul Bunten, President of Westsiders for Public Participation, a community group that has been vocal about protesting the causes of the October accident, said that he understands that "Urban Umbrella" is just a cosmetic improvement. "This new design wouldn't have prevented the accident at 97th and Columbus, because this new design is not related to safety," he said. The city's mentions of increased safety with the new design are limited only to a note that the new structures will not have exposed bolts. "Because of certain laws, more of the city's sidewalks are covered for longer and longer periods, and they're not attractive or inviting to walk under," Bunten added. Carly Sullivan, spokesperson for the Department of Buildings, said that the structure, designed to hold 300 pounds per square foot, meets all building code standards. "Sidewalk sheds are important part of keeping the city safe, but we asked ourselves is there any way to make the pedestrian experience easier to navigate?" Sullivan said. But one local scaffolding company raised safety objections to the proposed plan. "Concept of beautifying is fine, but it's not practical. I have yet to see a proposal that could meet building standards for scaffolds and could hold 300 pounds per square foot," said a vice president of a New York based scaffolding company who requested anonymity out of concern that his comments could negatively impact business. "The city should invest more time to ask engineers as opposed to just looking at the aesthetics." David Lapham, an operations engineer for the Turner Construction Company, which is running a construction site at 120th Street and Broadway, said that a new design would need to meet specific requirements. "It could only work if it doesn't block sidewalks and pedestrian traffic," Lapham said. LaVorgna said that once the city begins manufacturing the new sheds, businesses will be able to choose between using the current scaffold model—which, according to the mayor's office, has been in use since the 1950s—or the updated version. And to the mayor, design matters, he added. "The aesthetics of a product matter and impact quality of life," LaVorgna said. "New York City strives to have the best quality design possible and street life is New York life." Shelley Ferrall, an employee at the Mandell School located on the corner of Amsterdam and 95th Street, said that for the past five months her school has been blocked by a sidewalk shed, which makes it difficult for people to locate the school, and also blocks incoming light. "People struggle to find us now—they would be able to see us with this," Ferrall said of the proposed design. Pointing to a sidewalk shed on Broadway and 120th Street, Ron Shapiro, GS/JTS '13, said, "This is disgusting to look at. If it had more of an aesthetic feel, construction would get a less disgusting response." Leo del Vecchio, a construction worker at 120th Street, said that from a practical standpoint, new sheds are needed. "They should be replaced, they are heaved from years of frost." shira.poliak@columbiaspectator.com