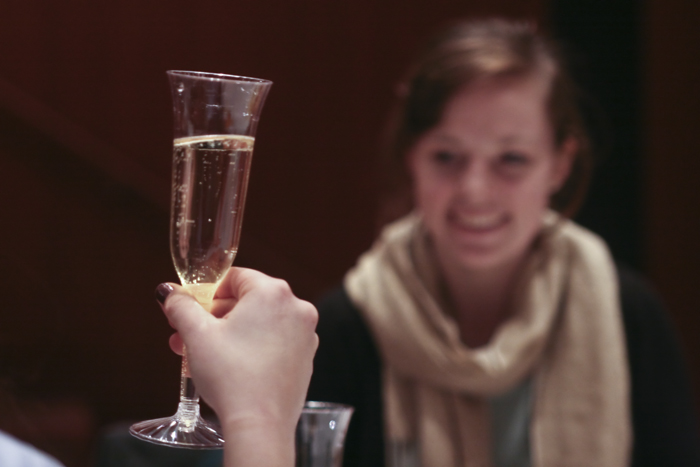 Barnard seniors share a toast at the annual event when administrators announce the Commencement speaker. This year, actress Meryl Streep will be speaking in May on campus. She was selected a year after Secretary of State Hillary Clinton gave the address.

She had to choose which of her children she would save in the Holocaust, she was the editor of a major fashion magazine, and recently she mastered the art of French cooking. Now, actress Meryl Streep is preparing for a different kind of role. After the annual senior toast was delayed a week due to the snow, Barnard Board of Trustees Chair Anna Quindlen announced Thursday evening that Meryl Streep will be the speaker at Barnard's 118th Commencement ceremony. The toast to seniors featured speakers Quindlen, Barnard President Debora Spar, and Diana Vagelos, BC '55 and principal donor for the new Diana student center. "On February 2nd, 2010, Meryl Streep was nominated for her 16th Oscar," Quindlen said. "On May 17th, she will play a role she has never played before." An American actress who has worked in theater, television, and film, Streep has received 16 Academy Award nominations and 15 Golden Globe nominations and won two Oscars and seven Golden Globes. She made her first appearance in a play called "The Playboy of Seville" in 1971, and since then, has been known for her roles in "Sophie's Choice" (1982), "The Hours" (2002), "The Devil Wears Prada" (2006), and "Julie & Julia" in 2009. Streep will be speaking a year after Secretary of State Hillary Clinton gave her speech. "It was a challenge to follow Hillary, but I think we've met the challenge," Quindlen said. "She's a trustee at Vassar, so she walks our walk and talks our talk," she added. Streep received her B.A. in drama from Vassar College in 1971, attended Dartmouth College as an exchange student for a semester before it became coed, and received her Master of Fine Arts from Yale School of Drama. "We are so excited about Meryl Streep coming," Spar said in an interview. "It's exciting news," Dean Dorothy Denburg said. "We're all very thrilled." Many students, who waited an extra week for the announcement, said that they were pleased with the choice. "I think that Meryl Streep is a phenomenal actress and also an intelligent, poised woman, and will represent our class very well," Anna Brower, BC '10, said. Melanie Weniger, BC '10, said, "I think she's very elegant and really well-spoken." "There was talk that it was going to be Tina Fey, but she [Streep] is better," Colbern Uhl, BC '10, said. "She's older and wiser." Allison Down, BC '10, said she was happy that this year's Commencement would feature an actress as speaker. "I think it's nice to have a break from politicians and have a different perspective," Down said. "I'm thrilled," Chelsea Zimmerman, BC '10 and Student Government Association senior class president, said. "You can just tell around the room, everyone's excited about it." She added that it was "very unexpected, but very, very awesome." madina.toure@columbiaspectator.com