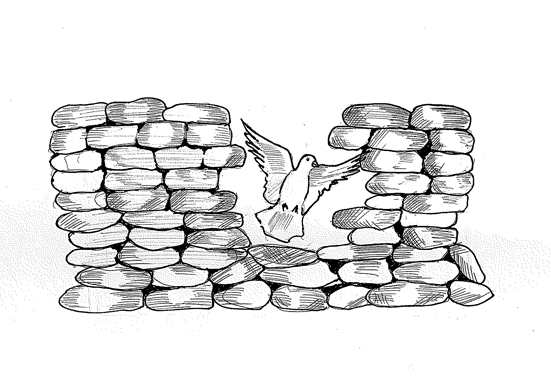 Daryl Seitchik
By Members of the Columbia chapter of Students for Justice in Palestine | March 27, 2013, 11:00 PM

This week marks the sixth annual Israel Apartheid Week, a series of on-campus initiatives meant to bring attention to the plight of the Palestinian people. It is not a coincidence that it also happens to mark the first-ever Peace Week for Israelis and Palestinians established by campus Jewish groups in order to facilitate dialogue between Palestinians and Israelis and to establish "peace." It is important to note that Israeli Apartheid Week is meant to raise awareness about the nature of Israeli apartheid, while "Israeli Peace Week" is organized to refute the existence of such a system despite the fact that a growing international consensus—comprised of figures including Desmond Tutu and Nelson Mandela—has recognized its validity. While some may have asked why a group of Columbia students would spend their weekends assembling a wall, the coinciding of the two weeks leads them to now ask why it is that sympathizers with the Palestinian cause choose to erect walls rather than engage in constructive dialogue toward "peace." The answer lies in the reactions of people passing by the wall. Most fall into one of two groups. Members of the first group typically have no idea that such a wall was erected in the occupied Palestinian territories and react with shock and dismay. Members of the second group, on the other hand, claim they regret the "inconvenience" the wall has caused Palestinians but insist angrily that its presence is necessary in order to ensure Israel's security. Both sets of opinions are completely unacceptable. As members of the Columbia community dedicated to the principles of human rights and equality and as Americans whose tax dollars facilitate our government's unfailing diplomatic, military, and economic support of Israel, we have a collective responsibility to learn as much as we can about the injustice millions of Palestinians must endure on a daily basis. Remaining ignorant of the wall or writing it off as a mere security apparatus is offensive and is one of the main reasons why Israeli Apartheid Week members have chosen to erect the wall rather than engage in dialogue toward "peace." Undoubtedly, we believe in—and call for—the need for peace in the region. We also completely stand by the fact that there can be no comprehensive, lasting, and effective peace unless certain issues are addressed. Issues such as the unrelenting occupation of Palestinian territories, the continued expansion of illegal Israeli settlements, the right of return for Palestinian refugees under UN Resolution 194, the illegal blockade of Gaza, and equality for Palestinian citizens of Israel are issues that must be resolved before Palestinians and Israelis can truly discuss peace. The first step is for the international community, Israel included, to recognize the legitimacy of the Palestinians and their cause. Simply put, the word "Palestine" must cease to be taboo. Too often, the Palestinian/Israeli situation is treated as a singular case in history, set apart from others by its historical or religious nature. But we cannot move forward unless we release that narrative. One of the main goals of Israel Apartheid Week is, in fact, to place the question of Palestine in a transnational and comparative frame by drawing analogies between Israel and other regimes. The second step is to recognize the injustices being committed against the Palestinians at present and to address and redress them. In order to establish equality between two groups, one must grant them both their rights and recognize their interests. In our opinion, the Palestinians have too often been the victims of a failed peace process (that was more process than peace) which rewrote their struggle against occupation as a negotiation between two relatively equal sides, sidestepping the question of rights and justice, both of which have been denied to them. Yet, there can be no true peace without justice, and no justice without the legal and social equality of Palestinians and Israelis. The Israeli wall, as we see it, is an obstacle blocking the path to peace, for it continues to delegitimize Palestinians and deny them their rights. In erecting a mock-wall on campus, we are essentially calling for that wall to be completely deconstructed and torn down in order for true peace to be established in its wake. Tanya Keilani is a student in the Graduate School of Arts and Sciences. Dayana Khatib is a student in the School of General Studies. Rahim Kurwa is a student in the Graduate School of Arts and Sciences. Alaa Milbes is a student in the Graduate School of Arts and Sciences. Aseel Najib is a Columbia College first-year. Fatimah Rimawi is a Barnard College first-year. Alaa Saleh is a first-year in the School of Engineering and Applied Science. Matt Swagler is a student in the Graduate School of Arts and Sciences. Randa Wahbe is a student in the Mailman School of Public Health. Maryam Zohny is a student in the School of International and Public Affairs.