In theater department, senior theses move from page to stage

In theater department, senior theses move from page to stage 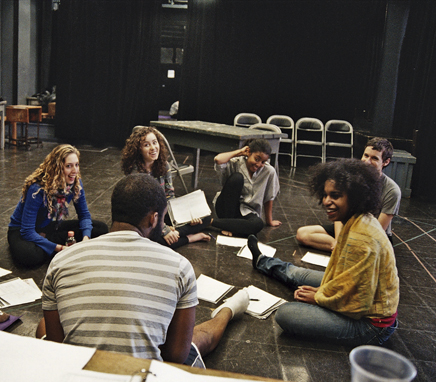 Most senior theses usually involve countless hours staring at a word processor and shuffling around the library with armloads of books, but a theater senior thesis is not most theses. Acting and directing theses are walking, talking collaborations involving extensive research and hours of rehearsal. From March 4-6 in Minor Latham Playhouse, three directors—Tatiana Hullender, CC '10, Danaya Mesa, CC '10, and Rachel Karp, CC '10—and two actors—Paige Johnson, CC '10, and Austin Smith, CC '10—will present and perform pieces that represent their four years of hard work. Hullender directs "The Inca of Perusalem" by George Bernard Shaw, a social comedy written on the eve of England's involvement in World War I. Hullender saw a number of parallels between Shaw's vision of English society and contemporary American society. "The economy is crumbling everywhere," she said, "but the rich people pretend like nothing is happening." Hullender decided to contemporize the production to better relate to today's audiences. "I wanted to create a retro-contemporary vibe," she said. "Our sound design is a combination of war ditties and beats from the Gorillaz." Mesa directs Sarah Kane's "4.48 Psychosis," a play about clinical depression featuring performances by Johnson and Smith. Famous for its poetic language and the absence of explicit stage directions or delineated characters, the play's line distribution and character development have been major subjects of inquiry throughout the rehearsal process. As Smith said, the unconventionality of the script "challenges us to fill every line with intention and purpose in order to stay connected to the play and our fellow actors." Regarding his role in the production, Smith added that "the most challenging aspect of directing this play was figuring out how to avoid reciting poetry and tell a real story." Karp helms "Chair," by Edward Bond, the story of a woman and child trying to live humanely in a dehumanizing society. Karp was turned onto the show by her former directing professor Maria Mileaf. "Professor Mileaf recommended I read Bond's most famous play, 'Saved,' which led to the abolition of theater censorship in the United Kingdom in 1965. I enjoyed it, so I found this shorter play, 'Chair,' which addresses similar themes," Karp said. When asked what she learned most from the process, Karp said, "I've learned that a large part of being a director is managing other people and other people's creative input." Like any thesis experience, the process of putting on these productions has provided a rich theatrical education for everyone involved. "I learned that it's alright not to have all the answers every step of the way," Johnson said.  "I realized the importance of continually committing myself to the work I'm doing," Smith said. For Mesa, the experience confirmed her belief that, as she said, "the best experience in the theater is one of total collaboration."