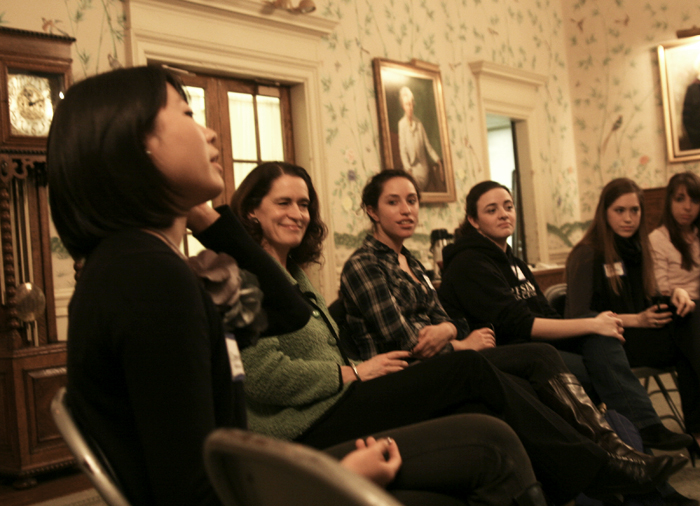 Barnard President Debora Spar led her last fireside chat of the year, where she asked about student internships and campus unity.

One student got a job working in an artist's studio through Craigslist. Another student has done construction real estate internships. And others turned to the Barnard Babysitting Agency.

These were some of the internship experiences that students shared at the last fireside chat of the year on Tuesday in Sulzberger Parlor with Barnard President Debora Spar, hosted by Giselle León, BC '10 and vice president of communications for Barnard's Student Government Association.

Spar asked students to share their stories of work experience in New York City, as well as the challenges they face in balancing schoolwork and activities.

"What's the best thing about doing internships?" Spar asked. "Is it making money? Is it running around the city?"

"For me, it's definitely been a sort of weeding process, so I'm just going to cast a wide net and let things stick," Chelsea Frazier, BC '10, replied.

Spar also asked how students make use of their free time: whether they relax and do leisure activities or strive to be a "superwoman."

"I think the Barnard environment is oppressive to a certain extent," Frazier said. "Some days I want to be a hippie and I need to be in law school tomorrow. It's just highly problematic to have this environment."

"It feels a little bit like status comes from being really busy," Spar commented. "I'm just sort of amazed by students telling me they're triple majoring. It does feel a little more, though, that people feel this is what defines success here."

Maeve Kelly, BC '13, said that she does not perceive as much of a community as she did at her high school.

Spar mentioned the house system, currently in the works, that would sort students into a system of eight societies to remedy the perceived lack of Barnard campus unity. She described it as an "instant channel to reach out to first-years."

Kai Qi Lee, BC '11, said that she was impressed by how comfortable students were in sharing their opinions.

"Students here are more vocal about their experiences, their lives, and they're very intimate with the faculty as well," she said.

"I think it was very representative of Barnard," Katie Martin-Browne, BC '10, said. "It's more of 'let's hear what people think' She [Spar] was like, 'I don't have an agenda.'"

Ultimately, SGA president Katie Palillo, BC '10, said she felt the discussion centered on issues that affect students most: the challenges they face in balancing the workload with other activities, as well as mental health issues.

"I don't think we talk about those topics enough, and that it shouldn't be an expectation that you take six classes, a lab, an internship, play a club sport, and speak four languages," Palillo said. "We should always try to engage in discussions about what's best for students here."