At JTS, a shift in focus

At JTS, a shift in focus 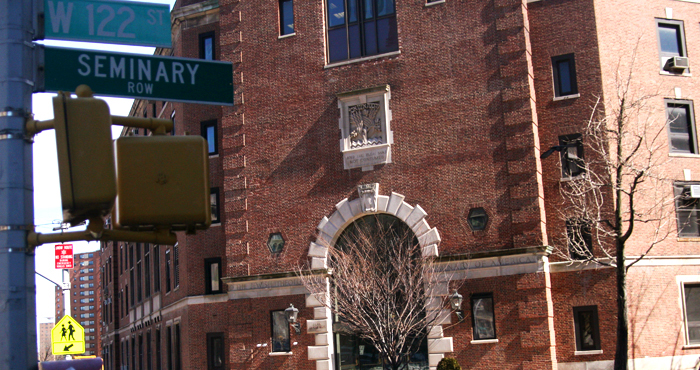 At Jewish Theological Seminary, students said they were surprised to hear that the dean of the Cantorial School had been dismissed. The program is looking to modernize, administrators say.

The Jewish Theological Seminary of America is undergoing major administrative restructuring and curriculum changes—something JTS Provost Alan Cooper says is an effort to catch the institution up to trends within religious education. JTS has eliminated the position of the Cantorial School dean, and the school curriculum is being adjusted to reflect what some say is the demand for greater multitasking cantors. Dean Henry Rosenblum will end his 12 years as dean of the Cantorial School on June 30 and is currently working out the details of a separation agreement with the administration. Rabbi Daniel Nevins, dean of The Rabbinical School, will become director of the Cantorial School, a new position. Administrators said they were not authorized to discuss "personnel matters." Effective July 1, Dr. Stephen Garfinkel, current dean of The Graduate School at JTS, will become associate provost, a newly created position and Dr. Shuly Rubin Schwartz, current dean of the Albert A. List College of Jewish Studies for undergraduates, will take over as dean of the graduate school and continue as dean of List College. List College is closely affiliated with Columbia University—many students get dual degrees through the School of General Studies or Barnard College. Several JTS students, like Matthew Klein, a graduate student in the H.L. Miller Cantorial School speaking on behalf of the Cantorial School Students Association, said that some of the changes, especially the administration's decision to eliminate the position of dean of the Cantorial School, caught them by surprise. "The chancellor had said that significant changes would be made at JTS, but we had no idea that he would fire our most beloved teacher and mentor, Dean Rosenblum," he said, adding the JTS Chancellor Arnold Eisen's announcement was "totally surprising." The Forward reported last month that JTS had a $3.8 million budget gap last year, though Cooper said that the decision to eliminate the dean's position was not driven by finances. "Our strategic planning is budget aware, it's budget sensitive, but it's not budget driven. Our primary concerns are our programs and the extent to which they meet the needs of our students and the communities they're going to be serving," Cooper said. The administrative and curricular shake-up is part of what administrators and students identify as a trend in the workforce. As more cash-strapped synagogues expect cantors to perform the roles of rabbis—and vice versa—Cooper said he expects the changes "will lead to greater coherence between curriculums." "I think the idea of re-imagining what the cantorate looks like will be beneficial to a lot of students," Jonah Rank, GS/JTS '11, said. "A lot of students are finding that in hard financial times there are fewer jobs at the pulpit. ... A lot of students have expressed the fear that they've been training for five years for unemployment." Both of Melody Mostow's, JTS/GS '13, parents are cantors, but she said she knows maintaining a cantor can be expensive, and most synagogues aren't willing to do it anymore unless the cantor can multitask—teach Hebrew School, perform services and b'nai mitzvahs, and deliver sermons. "My synagogue doesn't even have a cantor anymore," she said, adding that she was concerned about the trend. Rank said that students seemed to approve the curriculum change, but that "just about everyone is struggling to figure out why he [Rosenblum] is not returning" Still, Rank and some of his classmates were recently concerned that the Cantorial School would either close or merge with the reform Hebrew Union College, a rumor Cooper said has no basis. "We've had a series of discussions with Hebrew Union College about how we can partner with them. ... but that's just collaboration in areas where there's nothing distinctive about educating a conservative cantor versus a reform cantor," Cooper said. "Actually combining or merging the schools has never been on the table." Klein said that while the restructuring looks promising, "things feel very unsettled." Eisen commissioned a task force for the Cantorial School to determine what the "ideal cantor of the future" looks like, with Cooper at the committee's helm. The task force will include students, alumni, clergy members, and administrators. "The cantorial student body has stated that the Chancellor will have to work hard to rebuild trust. ... We will continue to press him to honor his commitments for transparency, openness, and communication—all parts of what we hope is a close relationship between the Chancellor and the cantorial school in years to come," Klein said. "We and other parts of the student body are confident that we will work together to form an exciting new curriculum unique to JTS that will prepare Conservative clergy for the 21st century," he added. leah.greenbaum@columbiaspectator.com