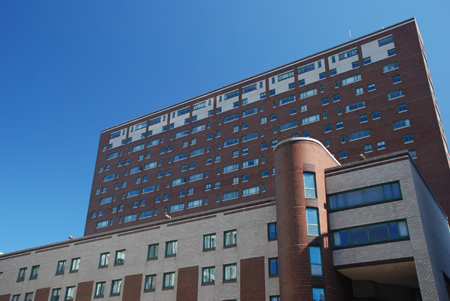 First, mad props in order! Bwog had lots of super-cool tidbits about lots of different dorms yesterday. We listed common registration pratfalls and how to avoid them. Now, we're delving back into the lottery, and going dorm-by-dorm with the lowdown on who's likely to get in where during the suite selection scrum. Lots to say here, so, three parts! The second to come later today, the third tomorrow.more You can use the cutoff history here as a reference, if you need it. But we'll list everything relevant to save you the trouble of jumping back and forth--numbers in parentheses are cutoffs, from last year if nothing else stated. In some cases, the history's pretty self-explanatory. But in other cases, things are a little bit more complicated. (And, note, again, "junior" means rising junior, not current junior, and so on.) One overarching point--the more housing cuts up suites (e.g. an all-single suite becomes one that includes a tiny double, singles get cut into doubles in corridor-living situations, etc.), the more the value of suites that have gone untouched rises. In other words, don't expect suite options that have gotten significantly more difficult over the last couple of years to suddenly get easier. And lastly, don't forget that RA riders can throw a wrench into any of the suite counts. 600 W 113th (aka Nussbaum): Doubles pretty straightforward--if you want one as a sophomore pair, you can just about have it (10/2746). Groups willing to take a chance can enter as several pairs and try to all pick into the same Nussbaum "suite" (which is not really a suite, but rather a lot of rooms that are picked into independently but share a kitchen/bathrooms). BEWARE the walkthroughs (10/2437)--in many cases, the entry room is the tiny room, which is pretty lousy for that occupant. 47 Claremont: This one's weird because it has so many odd suites. The easiest to decipher are the sevens--they made a huge jump in popularity last year (from 10/1224 to 11.43/2396) and for the first time were untouchable by all-sophomore 10-point groups. Expect that to continue this year--only groups with at least one junior will get these. The others are toss-ups.  The threes vacillate (20/154 last year, 20/2686 the year before), and since they're the only threes on campus, a few unusual entries (seniors with one willing to take the tiny single?) can throw this off. Safe if you're a senior, risky otherwise. The fours are the same--last year, for the first time, they went to all-senior groups (30/2282), likely because one of the lines of Ruggles fours was cut out and thus seniors missing out had no choice but to go here. That'll probably happen again--a real drag for them, as the one tiny single makes this option inferior to EC, Ruggles, and Hogan The single five-person and six-person suite? Your guess is as good as ours. Might be the saving grace for sophomores or juniors that took a shot with a group this size and saw all other options swallowed up. Broadway: Big doubles rising in popularity as McBain's walkthroughs and big doubles are chopped up bit by bit--went as low as 10/675 last year (though the year before was 10/2134, and the year before that was 10/1066, so don't take this number to the bank). But you'll need a great number to get this as a sophomore. The small doubles are, as always, available (10/2912). East Campus: Where to start? Everyone wants to live in EC. And if you're a senior, you can! Everything four, five (except EC Exclusion--see below), or six is going to all-senior 30-point groups. The four-person townhouses last year turned into the most popular suites on campus, cutting off at 30/301(!). So if you're in as a four and gunning for EC, there's a good chance you'll have to "settle" for Hogan or Ruggles. Five-person highrises are also tough (30/1023).  The other options have remained fairly consistent the last couple of years, so your chances are good but hardly a cinch for a six-person highrise (30/1466), two-person flat (30/1883), six-person townhouse with all singles (30/1804), or six-person townhouse with one double (30/2535). The oddity here is the sixth-floor doubles (10/2815), which are all alone on a floor with the EC Hotel, and probably will drop again to sophomores. East Campus Exclusion: Three years ago, an all-junior group or two snuck in here (20/303). Two years ago, groups with four juniors and one senior still had a decent chance (23.33/1236). Last year, it was three juniors and two seniors needed (26.67/2547). This year...might it get worse? The only way to be safe here is to have three seniors and two juniors, and thus a 30-point group value. Stay tuned for Part 2! And let questions abound.