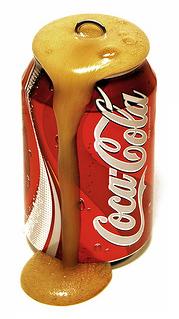 In the days of this troubling economy, state governments have to do anything they can to make their budgets work. In NY state's most recent efforts, they've decided to collect from their, er, largest demographic: fat people! more The state has decided to start taxing soda by the ounce, an effort they hope will both reduce consumption of soda, and increase revenues. The proposed tax is one cent per once, which doesn't really sound like much, but apparently New York drinks somewhere around one hundred billion ounces of soda a year, which is enough to fund some pretty significant projects throughout the state. What's next, a cupcake tax?! [NY Daily News]