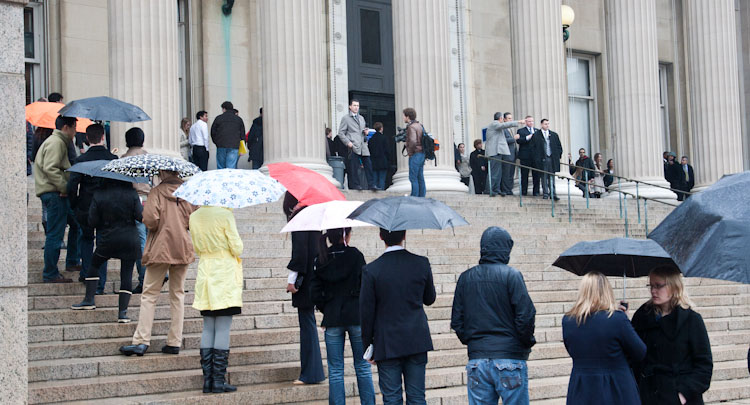 Despite the rain, hordes of students turned out to see French President Nicolas Sarkozy speak at Columbia's World Leaders Forum.


Sarkozy, whose visit was announced last week, spoke to a packed house about rethinking market and governance models, and putting pressure on nations that may pose a threat.


"In following him, one has the sense that he is more inclined than most to express his views as they are, regardless of the political consequences that might follow," University President Lee Bollinger said of Sarkozy.


"And for all this, we are in ... need of a free uninhibited flow of information and ideas and yet we are experiencing a rise in censorship around the globe that threatens our ability to see and think clearly," Bollinger said.


He added that he would like Sarkozy, who is expected to have dinner with President Barack Obama this week, to "extend to him our very best regards from his alma mater."


Sarkozy spoke of the importance of keeping in mind the consequences of power. "In Europe, we are your friends, your European friends. We in Europe admire you. You need not worry about that. However, in Europe, what we want is to be heard, to be listened to by the United States of America, that we should put our heads together and think together. You belong to a country that is the world's number one power. And you have to think about this very carefully, because what does that mean, to be the world's number one power?"


He also called for greater economic rules and regulations. ""World economic regulation can no longer stand still," he said, adding, "A few hundred irresponsible hotheads did mad things on the stock market, with derivatives, with other peoples money. Do you think we can defend capitalism when there is so much injustice? I don't think so because it is impossible to defend."


"If we don't change world governance, we don't stand a chance of being able to manage tomorrow's conflicts—for Iran where we need to show total firmness that must not be allowed to get its hand of nuclear weapons, we need the support of China and Russia to have sanctions."


Sarkozy commented on American domestic policy as well. "Health care is expensive. But you can't let people simply die," he said. Sarkozy added: "When the decision was taken not to bail out Lehman Brothers, we would have liked to be sounded out. That is solidarity."


Alan Krill, a graduate student at SIPA, said he came to the event because "French and U.S. relations have been rocky over the past decade." He added that he would like to see how the countries could form a mutually beneficial alliance.


Check out Spectrum for more updates.