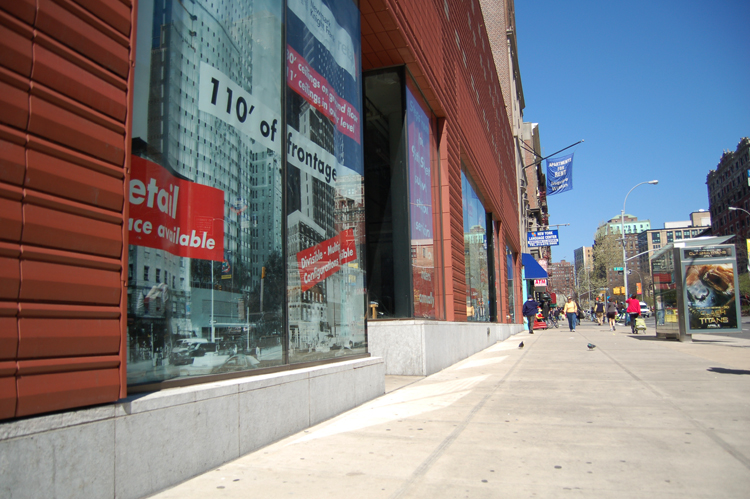 99th Street and Broadway is getting a makeover as Urban Outfitters plans to move in, across the street from the vacant Metro Theater, its original desired spot.

After a string of legal troubles and property disputes for the vacant historic Metro Theater, a national retail chain and potential tenant has decided to take its business across the street. Urban Outfitters is scheduled to open its seventh store in Manhattan at 99th Street and Broadway this summer, the chain recently announced. This development comes after a drawn-out struggle for the trendy outlet to find space on the Upper West Side. In Jan. 2009, Urban announced it had leased space in the building that was once the Metro Theater, located on the east side of Broadway, between 99th and 100th streets. The deal fell through as litigation persisted between the building's general partner, Al Bialek, and John Souto, the net lessee who leased to Urban. Bialek had leased the space to Souto, who was responsible for some of the property's expenses. Though Souto leased to Urban, the store was not able to break ground as the landowner and lessee were stuck in litigation, Bialek said in January. Souto, Bialek, and representatives from Urban could be reached for comment after the recent news about the new location across the street. Since the litigation, Urban Outfitters has been released from their contractual obligations with the Metro Theater property and has begun construction on their new space across the street, said Amira Yunis, the real estate agent who represents the landlord, Hudson Island LLC, of the site on the west side of Broadway where Urban will move this summer. The Metro Theater remains vacant. "I think this is a better position for Urban," Yunis said, citing the landmark status of the Metro Theater property. That protection would have meant that Urban would have had to consult with the city before making certain architectural changes, she said. At the bottom of the 31-story Ariel West tower, the store will feature two floors and nearly 15,000 square feet of retail space for clothing and housewares. "It has a lot to do with the Columbia University setting," Yunis said of Urban's demographic, adding that the location will also allow the store to take advantage of the affluence and growing retail scene in the area. The Upper West Side is an "emerging, cutting-edge neighborhood," she said. Currently, the only Urban location on the Upper West Side is at 72nd Street and Broadway, and some patrons there said they were excited about a location farther uptown. Claudia Talamas, a student at City College at 135th Street who was returning a dress at the 72nd Street location, said, "I like the clothes because they're trendy and inexpensive." "I would definitely go [to the new location]," said Alexis Solorzano, who goes to high school on the Upper West Side. "It's a lot closer to where I live." For some longtime residents, the news of Urban's arrival speaks to a larger change in the neighborhood environment. Over the last year, many large stores have opened nearby, notably at the Columbus Square development between 97th and 100th Streets on Columbus Avenue, which includes a Whole Foods and a T.J. Maxx. Previously, the block had a diner and a small supermarket. "It's great—it's a neighborhood in transition, there are many new buildings," said Margaux Teil, a high school student shopping nearby. But the increase in big stores hasn't been a positive development for some residents, who have opposed the fast influx of retail and the rise of residential towers like Ariel East and West. Batya Lewton of the Coalition for a Livable West Side—a local group that has opposed out-of-context development—said, "The community does not need huge stores that cater to a limited population and not the neighborhood." Lewton, who grew up on the Upper West Side, said that years ago, "What you had were mom and pop businesses all along Broadway all the way up to 96th Street. ... With all the new stores we drove out all of the local businesses." news@columbiaspectator.com Correction: An earlier version of this article listed Bialek as the owner of the Metro, when in fact he is the president of Seavest Management Corporation, the General Partner. Spectator regrets the error.