No new recognition for Greek life at BC

No new recognition for Greek life at BC 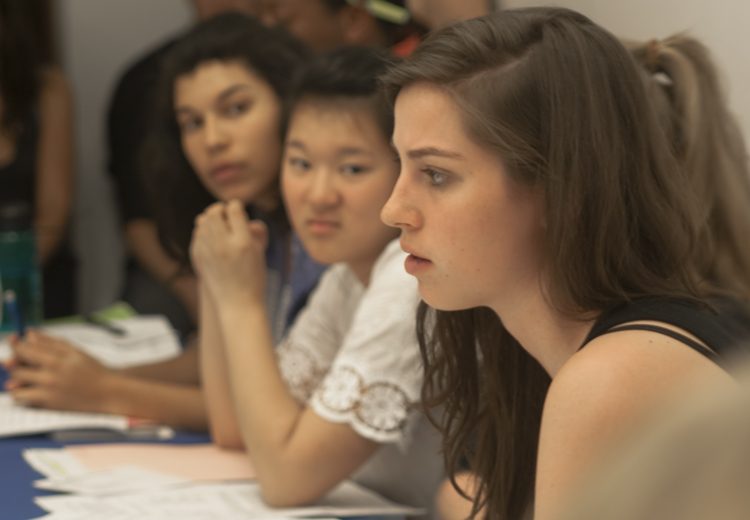 After a boom in Greek life interest this year, sororities and fraternities are saying it's time for greater recognition on campus. Representatives from the Inter-Greek Council came to Barnard's Student Government Association meeting on Monday to apply for official recognition—a step which would give them financial support and greater access to event spaces and other campus services. But after much debate, the SGA, with 10 yeses, five nos, and two abstentions, voted to maintain the current status for the Inter-Greek Council—for the most part unrecognized. Currently, the Inter-Fraternity Council, which oversees fraternities, and the Multicultural Greek Council, which oversees multiethnic Greek organizations, do not have any recognition at Barnard—only at Columbia. The Pan-Hellenic Council, which oversees four national sorority chapters, has recognition at Columbia, and also has what is called "stage one" recognition at Barnard, which means, among a handful of privileges, sororities in the Council can flyer, reserve space, hang banners in Barnard Hall, and get an adviser. These sororities cannot though apply for academic-year allocations at Barnard without "stage two" recognition, which Barnard campus groups outside of Greek life typically have. Any group, regardless of recognition status, can apply for cosponsorship with SGA. All three of these councils fall under the IGC, which came to the SGA on Monday. Pan-Hellenic Council President Nora Feinstein, BC '12, said she wanted stage one recognition for all councils under the IGC. She also said she hopes to work toward stage two, which would provide funding for events. This push for stage two recognition for the Pan-Hellenic Council comes on the heels of a surge in Greek life, with a more than 30 percent increase in women registered for sorority recruitment. Though Columbia recognizes sororities and fraternities, Barnard's constitution states that "no sororities or clubs involving membership on a discriminatory basis shall be recognized by the SGA," though it "supports students involved in Greek organizations through the Pan-Hellenic Council." The IFC and MGC are seeking stage one recognition so that they can flyer and reserve space for events at Barnard. But the SGA turned down the request for Barnard recognition for all councils on Monday night, due to concerns about Greek life exclusivity, the due payment process, and a perceived lack of understanding of SGA recognition, among other reasons. If the councils ultimately were granted stage two recognition, the amount they would receive would be determined by a Funding at Columbia University intercouncil ratio. Each council would receive "a proportion of Barnard student activities fees, that they in turn allocate to the organizations they oversee," said SGA President Katie Palillo, BC '10. Though SGA did not formally recognize the Pan-Hellenic Council for the 2009-2010 academic year, it did give the council a $1,000 gift, which is more than it would get if formally recognized, noted Vice President of Finance Sharmin Ahmed, BC '10. Feinstein emphasized how Barnard has enhanced the lives of sorority members, and vice-versa. "People really value the experience they've had, both in Greek life and at Barnard. We found that we heard again and again that women's sense of self and also their connection to Barnard [were] deepened through their Greek experience. Currently, two of the four presidents of the Pan-Hellenic sororities are Barnard women." The IGC calculated that about 10.4 percent of Barnard students are involved in Greek life. Feinstein encouraged the SGA to step up to the plate for its students. "Step forward on behalf of 10 percent of Barnard students," she said. "Our aims as a governing board are congruent with those of Barnard's community." "Being recognized by Barnard, it just means something to us as individuals," added Pan-Hellenic Council Treasurer Lauren Perrine, BC '12. But, under its constitution, the SGA does not fund groups that collect dues, said Giselle León, BC '10, SGA vice president of communications. Sororities require several hundred dollars worth of fees each semester. "I just don't know if I could support this because you're looking for stage two. I don't see how the funding would work, because you collect dues," Chelsea Zimmerman, BC '10, senior class president, said. Feinstein replied that the Council provides scholarships and means for members to make up unpaid dues. Some members of the SGA also found fault with the exclusivity of Greek life. "We don't fund things that are not obviously open to the community," León said. "Even if you stipulated that the money we would give to you [would go to Barnard], that still is problematic. You could just switch around your funds," Zimmerman added. Palillo said that though there were lots of different concerns with regards to Greek life recognition, this is not the end of the discussion. "It was a very solid presentation and I think ... [the] Council learned much from our fellow student leaders." carly.silver@columbiaspectator.com Correction: An earlier version of this article listed cosponsorship as a privilege of stage one SGA recognition, when in fact any group can apply for cosponsorship. The article also did not specify that stage one funding restrictions refer to academic-year allocations, and not funding in general, since cosponsorships are always available. Spectator regrets the error.