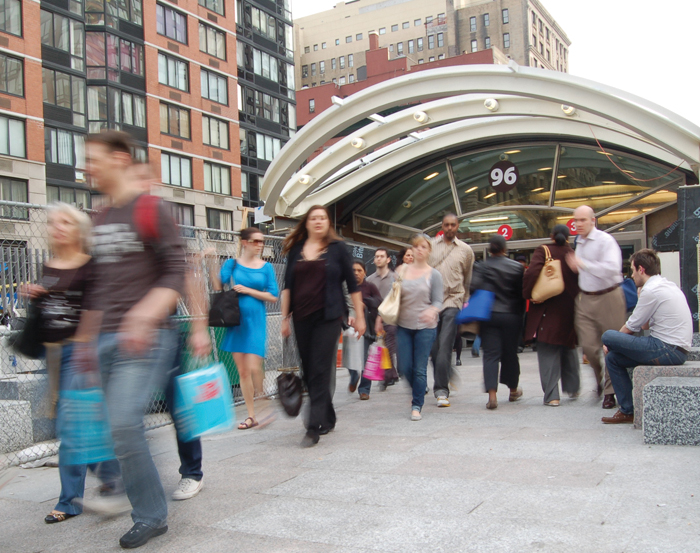 The new 96th Street Subway Station House is now open for business—partially. On Monday, the large station house located on the median on Broadway between 95th and 96th streets, which has been under construction since 2007, began service as the official restructured entrance to the 96th Street 1 train subway stop. Both the former downtown and uptown corner entrances to the station at 96th street have been boarded up and closed permanently, while entrances at 94th Street remain open. Though passengers can now get to the platform from the new above-ground entrance, the station house will not be entirely complete until September. According to MTA spokesperson Charles Seaton, the station still lacks three essential components—the completion of elevators that are in compliance with the Americans with Disabilities Act, the landscaping of a new park on the median outside the 96th Street entrance to the station house, and the finished interior, including walls, hand rails, and station artwork. "This is the soft opening, and the grand opening will be in September," said Andrew Albert, chair of the New York City Transit Riders Council, MTA board member, and co-chair of the Community Board 7 Transportation Committee. MTA representatives say that when the final design is finished, it will be a lot more efficient for commuters. "The main benefit of the new station house is that commuters will no longer need to descend down a flight of stairs and walk back up," MTA spokesperson Aaron Donovan said, referencing the former method of entrance at 96th Street. "Also, folks who transfer from the downtown to the uptown platform at this station now have an additional way to make that transfer—up the stairs and over or down and under the tracks." In September, a three-dimensional mobile with 180 sculpture flowers will hang in the station house, and Sandra Bloodworth, director of Arts for Transit, the MTA's arts division, said that they will begin the fabrication of the artwork soon. She added though, "The priority is to get this open and provide accommodation for the neighborhood. ... We're about transporting people, and the art comes second." Passengers on the platform at the 96th Street station on Tuesday said they liked the new look and hope operations will be smoother. "This is my first time coming into the new facility, and it looks great," said Christina Banz, a regular rider at 96th Street who lives on 101st Street. "I like the wider staircases and the nice serving area. The short-term construction, I think, will yield a long-term gain." Peter Vaughn, also a regular commuter, said that the new efficiencies should be helpful. "Anything to make the transportation in New York better and faster is good by me," he said. Anthony Dionisio,who takes the 1 train often, said that he approved of the changes but had some concerns. "I feel like it's going to get crowded very easily now, because it will be so nice," Dionisio said. "It will be just like the 72nd Street station at rush hour." nicholas.bloom@columbiaspectator.com