NFL Draft: cheering for Columbia's own to make it out on top

NFL Draft: cheering for Columbia's own to make it out on top 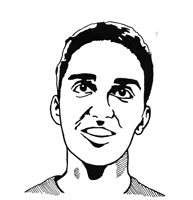 With just under eight days to go before the start of the NFL Draft, many of the draft pundits around the country are picking apart many of college football's most high-profile players. more In the days and weeks leading up to the draft, it's the big-name, blue-chip players that tend to garner most of the attention. These days, if you turn on ESPN, all you'll hear about is Sam Bradford, Gerald McCoy, Jimmy Clausen, and, of course, Tim Tebow. And with good reason. Franchises will literally invest over $40 million in at least a few of these names, and they will take them with the intention of making them the cornerstone of their franchise for years to come. But what I've seen from watching football for years is that, sure, the big names may be ones that sell tickets, but it is often the little guys that win the tight games, and eventually turn a team from a pretender into contenders. It's here that the link to Columbia comes in. Anyone who read Holly MacDonald's column a few weeks ago on Columbia's own NFL hopefuls Austin Knowlin and Millicent Olawale could tell you that the duo faces an uphill battle not only to hear their names called during the NFL draft, but just to earn the respect and attention of scouts and general managers. Well, it's time for me to say something that I hope every person, ranging from the administration to students here at Columbia, is thinking. I hope these guys make it. And not only do I hope they make it, I hope they make it big. Marcellus Wiley, CC '97, made it big in the NFL, playing for 10 years and even making it to one Pro Bowl. We still talk about him today in the sports office at the Spectator. It's time we got some new names to talk about. Knowlin, in particular, is an intriguing prospect to me. Listed at 5-foot-11 and 193 pounds, he may be considered by some scouts to be too undersized, but anyone that has seen him play for the past couple of years knows that what makes Knowlin special at the collegiate level is his ability to make plays with the ball in his hand. Why wouldn't this ability translate into the NFL? Sure, he might not have the raw talent of Randy Moss, but really, how many people do? There's a Hall of Fame for them, but almost everyone else in the NFL grinds by with great talent and an even better work ethic. He might never be a No. 1 receiver, but he has skills that could be useful, particularly on special teams. After all the success he's had in college, I think he at least deserves a chance to prove that he has what it takes to hang with the big boys in the NFL. Realistically, will I be seeing both Knowlin and Olawale in NFL Pro Bowls in the near future? No, but history has seen stranger and less plausible things happen. I'll be watching, and I hope you will be too, and cheering the two of them every step of the way. And who knows what will happen? As they say, that's why you play the game.