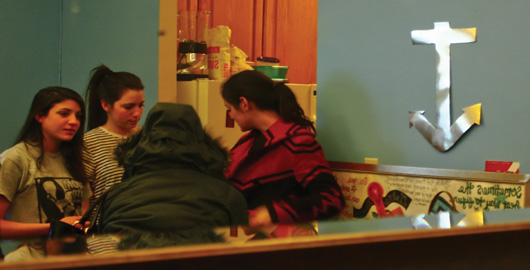 With the Barnard student council declining to officially recognize Greek life, representatives from University sororities and fraternities are exploring potential measures to limit Barnard's involvement in campus sororities. Earlier this month, Barnard's Student Government Association voted down a proposal to recognize Greek life—a move which would give fraternities and sororities greater financial support and access to event spaces and other campus services at Barnard. SGA acts as a governing board that allocates funds to student groups. SGA has typically not recognized Greek life because Barnard's constitution directly states that SGA cannot recognize sororities or clubs that choose members on a "discriminatory basis," but recently the InterGreek Council, which is a Columbia governing board that includes three Greek life branches, has pushed for official SGA recognition. Since SGA shut down the latest proposal for recognition, the IGC has begun to explore potential courses of action, including possibly capping Barnard participation in sororities. In a formal statement the IGC made to the student council presidents of the Columbia College Student Council, the Engineering Student Council, the General Studies Student Council, and SGA, the IGC wrote, "The council [IGC] was left with some very tough choices to make regarding the future of Barnard students' involvement in Greek life on Columbia's campus. We cannot in good conscience continue to grow at this pace without basic recognition for our governing board." Currently, all undergraduate student councils, including SGA, do contribute money to Greek life funding. Though SGA does not grant sororities recognition, it has given gifts to Greek life councils in the past, in some cases exceeding the funds the councils would receive with recognition. Further, any group, regardless of recognition, can also apply for cosponsorship with SGA. Despite fixed sums from SGA, the IGC argued in its statement that the lack of recognition limits Greek life benefits, "Those Barnard students involved in an IFC or MGC [IGC branches] organization do not have access to any of the benefits of being involved in a club recognized by SGA." The possibility of a cap on the number of Barnard students that can rush in the future would not affect Barnard students currently in sororities, and the IGC said it will allow Barnard students to continue to participate in Greek life in the 2010-2011 year. While Nora Feinstein, president of the Panhellenic Council, one of the Greek life branches, said she cannot confirm that the capping method will be the ultimate path the IGC takes, she said that Barnard students will definitely not be barred from rushing sororities next year. The fate of Barnard students wishing to rush sororities in the future, however, may swing in the balance. The statement also said that should the Greek life councils not get the recognition they have requested from SGA, "We will be forced to take additional steps which may include the total restriction of Barnard students from involvement in Greek Life." CCSC President Sue Yang, CC '10, said she believes that the money that CCSC contributes to Greek life should go to supporting CC students and not Barnard students, whose council does not recognize Greek life, "It is on principle that our money should be going to CC students," she said. For many, the issue is more philosophical than fiscal. Nuriel Moghavem, CC '10 and CCSC vice president of funding, said that the chunk of money that Barnard would contribute to Greek life funding if it recognized the IGC is insignificant in the larger financial scheme of student life. According to Moghavem, what Barnard would owe if it recognized Greek life is "a drop in the bucket really—which makes it seem like a philosophical issue." Moghavem added that he "can't see people getting too nervous about the money because it's not a huge difference." Gunnar Aasen, SEAS '10 and vice president of Intergroup for ESC, overseeing funding, said, "We do want to take into account the fact that the contribution from F@CU [Funding at Columbia University] does not include a payment from SGA." F@CU is a board made up of the incoming and outgoing presidents' and vice presidents' funding from GSSC, ESC, CCSC, and SGA, and at the end of the year, it holds a summit to allocate funding to the five governing boards—the Activities Board at Columbia, the Student Governing Board, Community Impact, club sports, and Greek life. Katie Palillo, BC '10 and president of SGA, said that the council members have been very involved in the decision-making process but that no conclusion has been reached as of yet. "The presidents of the other councils have been very aware and involved in the discussion since the very beginning. We met with the presidents and the president of Panhell about a month ago to talk about exact next steps for what the councils will be funding, and nothing has been finalized yet," Palillo said. Aasen said that any decision made will most likely happen after the next F@CU meeting on May 4. He added, "We haven't really made a final decision." elizabeth.scott@columbiaspectator.com