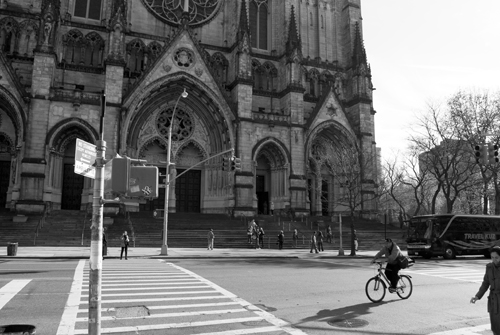 St. John the Divine has created a new vertical tour for Columbia students, in an effort to forge stronger ties with the University.

Father Richard Sloan, a volunteer Episcopalian faith advisor at Columbia, is working to bridge the gap between two of Morningside Heights' largest institutions. Sloan, who is also the Diocesan Stewardship Officer at the Diocese of New York, which is located at the Cathedral of St. John the Divine, has been working since the fall to establish greater connections between the Cathedral and the Columbia student body just a few blocks north. Since joining the campus chaplaincy in November 2009, Sloan has organized free vertical tours of the Cathedral for Columbia students, many of whom have never entered the building's impressive Gothic façade. Last Saturday, 43 undergraduate and graduate students braved the early morning and 13 flights of stairs to get a close look at the Cathedral's stained glass windows that date back to the 1930s, study its elaborate architecture, and climb to the top of the Cathedral. "I'm aware that if you've never been in a cathedral or are not a church-going person, entering a cathedral can be daunting," Sloan said. "Through the tours, I hope to break down those apparent barriers." Sloan said he wants to encourage students to enjoy the Cathedral's concerts, literature, and worship events, as well as the quiet gardens and chapels, which he said can be sanctuaries from busy college life. He added that recently the Bishop has approved his suggestion that students not be asked to give a suggested donation upon entering the Cathedral, to make it a more inviting, welcoming place for them. Isabel Kim, a master's student in the graduate program for art history and archeology, said she enjoyed getting a hands-on, behind the scenes tour. "St. John the Divine is now more personable. It's not just a beautiful Gothic structure that I pass by during my school commute," Kim said. "I have this emotional attachment to it, this sense of awe, this sense of the craftsmanship that went into it." The Cathedral's vertical tours are a popular tourist attraction that often cost visitors $15 per person, though the Diocese has underwritten the flashlight-guided tour for Columbia students twice this year. "We stopped at five different levels, and each time I thought that it was the final level and was more amazed at the access and what we were seeing," Ryan Salvatore, a post-baccalaureate student studying architecture, said of his tour. "We were standing between the ceiling and the church in this amazing cavernous space." Sloan said there is a strong relationship between the University and the Cathedral "on the upper, administrative level" between the Deans of the Cathedral and the President of the University but that he wants to "broaden the relationship and make students feel welcome." In addition to exposing the general campus to the Cathedral, Sloan has focused on strengthening ties between the Cathedral and an Episcopal religious group on campus. Peter Thompson, CC '12 and president of the campus Episcopal group, said that this year the Episcopal and Lutheran students were able to get free tickets for the holy service at the Cathedral. He also said that Sloan has been very active in creating shorter prayer and social events, such as a Wednesday afternoon lunch and prayer service, to fit students' busy schedules. University chaplain Jewelnel Davis also welcomed the initiative and said that it is an important addition to the already strong historical connections between the University and the Cathedral, and the Episcopalian movement in general. From the appointment of the first official university chaplain, Reverend Cornelius Duffie, in 1857 until the late 1960s, for over a hundred years, the university chaplain was Episcopalian, Davis said. She added that though the cathedral is a globally recognized landmark, students in its backyard sometimes have little knowledge of it. "We have visitors come from all over the world who know more about the Cathedral than Columbia students, and it's in our neighborhood." shira.poliak@columbiaspectator.com