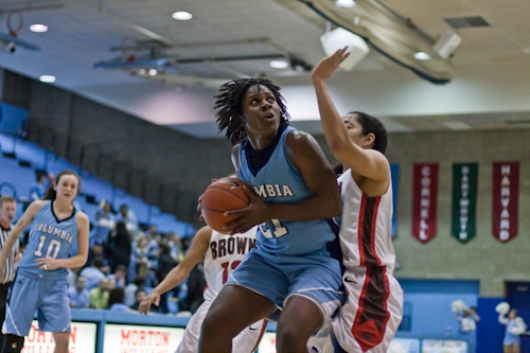 After signing a training camp contract with the WNBA's Connecticut Sun in April, former Columbia women's basketball standout Judie Lomax will have to pursue her dream of playing professionally elsewhere. According to the Sun's Media Relations department, Lomax was waived by the team on Thursday.more
In just two seasons with Columbia, Lomax was a bona fide star. She averaged 14.2 points and a nation-leading 14.3 rebounds per game en route to all-Ivy League first team recognition in the 2008-09 campaign. This past season, Lomax led the conference with 18.6 points, 14.2 rebounds, and 2.6 steals per game while also contributing 2.7 assists per contest. Her rebounding average was once again the best in the nation, making Lomax the only NCAA women's basketball player to achieve the distinction in consecutive campaigns.
Lomax was Ivy Player of the Year in 2009-2010 and the Associated Press All-American honorable mention. The forward's 799 career rebounds and 918 career points are the second- and 10th-most, respectively, in Lions history.