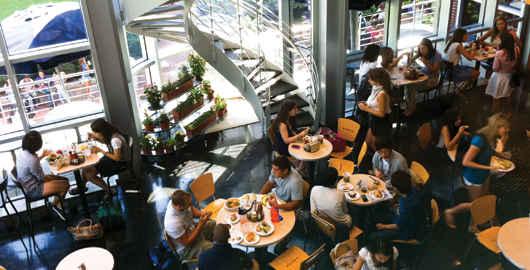 Administrators are enthusiastic about this semester's dining changes, but students say they're still skeptical about the adjustments. Starting this school year, all Barnard students must purchase a meal plan—first-years are still required to be on the unlimited plan, upperclassmen living in Hewitt are required to be on a plan with fewer meals and at a lower cost, and all other upperclassmen having to take one of three dining programs costing at least $300 a semester. At Columbia, students will be able to use meals and dining dollars at John Jay, Ferris Booth, and JJ's. There is a door price for each of the dining halls, though credit cards, Flex, and Dining Dollars are still taken. In the first option for first-years, students will receive 19 meals per week with 75 Dining Dollars per term, plus an additional 15 "floating" meals for any time and six "faculty meals," or dinner with a professor on the house. In the second option, a first-year could have 15 meals per week and 125 Dining Dollars per term, with 10 floating meals and six faculty meals. Upperclassmen, General Studies students, and graduate students will have four plans to choose from, ranging from 14 meals per week to 175 meals per term. They also have the option of guest meals. Victoria Dunn, director of dining operations at Columbia, was optimistic about student reception. "The first-years loved it," Dunn said. "I was there at 11:30 [p.m. on Monday] and the first-years loved the fact that they could go to JJ's. We open at 8, so we're open from 8 a.m. to 1 a.m." She added that the upperclassmen she encountered were also in favor of the new hours. "I actually saw some students this morning who were excited that they could get breakfast at 8:30 a.m.," she said. According to Dunn, the number of students on a voluntary meal plan has increased from about 1,200 to about 1,400 in the last four years. Dunn spent the last 18 months working with the Dining Advisory Committee, a committee of representatives from all classes, with whom she meets once a month. She also convened with other students and the deans of the college, so she is confident the changes reflect student interests. But students interviewed on the first day of classes said that overall, changes to the dining program—particularly the loss of Flex at JJ's and Ferris Booth—did not make the meal plan any more appealing. "I mean, I live off-campus," Tom Bettridge, CC '12, said. "I have the option to get a meal plan, but I decided not to because I'd rather go to a restaurant or make my own food. If I had a meal plan, I probably would never go. Especially since there's no Flex, I'd rather go to a restaurant than a cafeteria." "Because of the changes, I am just going to get the lowest meal plan possible because the dining halls aren't that appealing," Fatima Dicko, SEAS '12, said. Dicko also said she was disappointed in the changes to JJ's, especially considering that it requires either Dining Dollars or meals and does not accept Flex. "It used to be a place to just hang out even if you weren't eating, but now if you have to swipe in, that takes out the whole 'hanging out' factor of it," she said. Ali John, MBA '11, said that graduate students rarely use the meal plan and typically eat off-campus. "I'm not on a plan," John said. "I was unaware of a plan. I don't know of anyone in the MBA program on a plan." And the dining changes do not seem to have had much of an impact on GS students, either. "From my experience, at least as a GS student, I don't know anyone who eats here," Catherine Chan, GS, said. "Everyone tries to get out of the meal plan, and if they have it, they don't use it. For GS students, we pay per credit. I don't think improved meal plans would encourage us to buy." Dunn said that she was pleased with how the changes—after nearly two years of planning—have brought students together. "I think that the biggest thing last night was seeing the community at JJ's. You know, the foosball table, the games, students having a good time, and me being able to give them a place to do that, because basically now on this campus, from 8:30 a.m. to 1 a.m., you can use a meal plan swipe and get in anywhere." Goldi Juer, director of operations for dining services at Barnard, was not available for comment Tuesday, but a summer break doesn't seem to have cooled tensions about the required meal plan for Barnard students. "I don't live on campus, and also, I can't eat beef and any cow products, and that happens to be most of what's served here," Stephanie Aiuto, BC '12 and a commuter, said. "So for me, who doesn't eat here, it's kind of like throwing money down the drain." First-year Barnard students are still required to purchase the unlimited meal plan, but upperclassmen living in Hewitt are allowed to select a less expensive plan with fewer meals. All other students could choose from three meal plan options for $300 per semester. Previously, first-year students and upperclassmen living in Hewitt were required to be on the meal plan and all other students could opt out. Though she said she understands the concerns of students who do not want to buy a meal plan, Elyssa Brent, BC '11 and a commuter who previously lived in 600, a Barnard dorm, said she is OK with the requirement. "I would be on the meal plan anyway," Brent said. "I don't cook much." Rachel Shuman, BC '13, had mixed feelings about the requirement. "I guess on the one hand it's good, because I don't have to completely cook for myself all the time, but on the other hand, I was looking forward to having more control over what I'm eating," she said. madina.toure@columbiaspectator.com