How to eat a real bagel

How to eat a real bagel 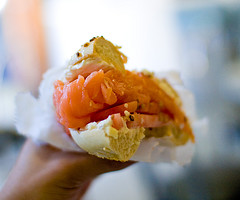 In this installment of our "How to" series, native New Yorker Raphael Pope-Sussman tears mediocre bagels a new hole.

Bagels are traditionally considered a Jewish food. However, Jews do not have a monopoly on the bagel. Anyone can make a bagel and anyone can eat one. The bagel is a democratic food. A round piece of dough with a hole in the middle does not a bagel make. A bagel is not a pillow. It does not have the consistency of a pillow, nor is it the size of a pillow. You may think it's a good deal that certain establishments sell "bagels" that are humongous. That's fine, but remember those things are not bagels. Bagels are small , with a crunchy, robust crust and a chewy, delicious center. The bagel is democratic in the sense that no party or faction has a monopoly on making bagels. It is not, however, democratic in the sense that all bagels (and all toppings) were created equal. There is no such thing as a blueberry bagel. That is just a shiny blueberry muffin shaped like a donut. The only real bagels are the plain, sesame, poppy, pumpernickel, and egg. Everything, garlic, and onion bagels are also acceptable, as they were created in the true spirit of the bagel. Cinnamon raisin "bagels" are not bagels. Cinnamon is a spice made for Cinnabon, not for bagel bakers. Cream cheese (also know as schmeer, if you want to be obnoxious) is the essential bagel topping. You can put lox (smoked salmon), whitefish, sturgeon, or herring (if you really like salt) on your bagel with cream cheese. You can also put egg salad, tuna salad, or whitefish salad on your bagel. If it's morning and you're in a rush, you can get butter on your bagel. But don't make it a habit. The best bagels in New York are at the Bagel Hole in Park Slope. That is science. In this neck of the woods, Absolute Bagels is very good. H&H is overrated and overpriced. There are a few other real bagel bakeries in this fair city, but for the most part, you'll find con artists selling their wicked discs of bread in the name of bageldom. For more on the history of bagels, check out this article and these two pieces from the New York Times. Hopefully by the time you graduate, you too will be able to spread the Good Word about bagels.
bagels how-to