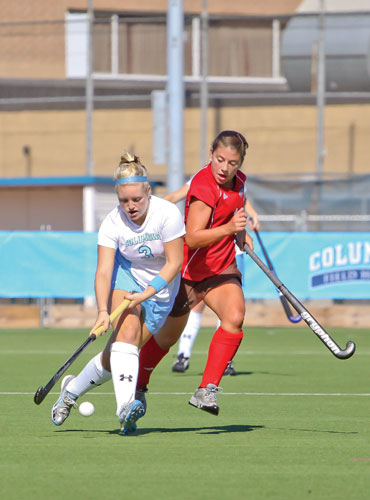 It was a familiar sight for Columbia. Headed into overtime tied 2-2 versus West Chester last Friday, the Light Blue had to be wondering: Was this going to happen again? Last season, under similar circumstances, Columbia more often than not failed to find that final surge to put away tight games. The team lost an overtime heartbreaker to Bucknell in the second week of the season and then fell in overtime matches to league rivals Cornell and Yale. This time, though, thanks to sophomore forward Gabby Kozlowski's golden goal in the 90th minute, Columbia broke away from this unfortunate trend and emerged victorious in the double overtime nail-biter. "Losing in overtime is the hardest thing," Kozlowski said. "When we lost to both Yale and Cornell last year, we knew we could have beaten them, and it was just frustrating because the games went into overtime and didn't end up the way we wanted them to. Just close losses like that are particularly difficult." With Kozlowski's rise from freshman to sophomore, such narrow losses may not occur as frequently. This season, Kozlowski has scored six goals in just four games, already surpassing her total of four all of last year. With these six goals, Kozlowski currently ranks second in the Ivy League in total goals and also second with 12 points. Kozlowski first picked up field hockey while playing casually with her friends during an elementary school summer camp session. She was immediately passionate about the game and played a key role on her middle school field hockey team. Later, as a member of the powerhouse Eastern High School hockey team in southwest Jersey, her list of accolades began to accumulate. By the end of high school, she had been named a regional All-American and first team all-state, and her Eastern High team had one of its most successful runs in school history, winning the state championship all four years while she was there. Kozlowski was heavily recruited—she was described by Columbia head coach Marybeth Freeman as a "high-profile athlete"—and was sought after by several prominent athletic programs. "I was looking at a couple of schools in the Big Ten conference, as well as the Ivy League and the ACC," Kozlowski said. "But ultimately I decided that I wanted to come to Columbia because I wanted to have the balance of academic, social, and athletic life." As a freshman, Kozlowski played in 16 of the team's 17 games and started in three. Even in her first year, she played a pivotal role on the team. Her most notable performance that season came against Lehigh—she scored two goals, including the game-winner, in a 3-1 victory. For her efforts in that game, she earned Ivy Rookie of the Week honors. As a sophomore, Kozlowski—along with senior tri-captain Julia Garrison—has been a focal point of the Lions' forward line. Freeman offered nothing but adulation for Kozlowski's abilities and poise this season and predicted a bright future for her. "She is very much a leader on that forward line by her tenacity and her willingness to do not the prettiest work to get in there and make things happen," Freeman said. "She's already a leader in her own right, and I really foresee her taking the game to the next level." With Kozlowski playing a starring role for the Light Blue squad, the Lions seem primed to improve on last season's fifth-place finish. "This year, specifically, is a new year for us," Kozlowski said. "We're really working to make a name for ourselves in the Ivy League and be a real threat and a huge competitor for the title."