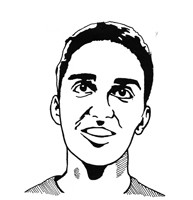 The most interesting story about the football team's season opener against Fordham on Saturday has to do with John Skelton, which comes as a surprise seeing as how he isn't even on the team anymore. more Skelton, who was the starting quarterback for four years at Fordham, was picked in the fifth round of the 2010 NFL Draft is third on  the depth chart in Arizona, and was someone whose success in training camp  reportedly made the Cardinals decision to release Matt Leinart a lot easier. Skelton, at 6'4" and 244 pounds has the body and skill set of an NFL quarterback,  but scouts wondered during pre-draft workouts whether the level of competition  that he faced at Fordham had adequately prepared him to play in the NFL. Skelton, in fact, has an interesting connection to the Ivy League, and Columbia in particular. Skelton's uncle, Javier Loya, who is a minority owner in the Houston Texans and played quarterback at Columbia was the one that first brought him to New York City with the goal of landing a football scholarship by dropping off Skelton's high school game tape with around a half dozen schools. But to me, what makes Skelton even more relevant to Columbia is the fact that he was able to convince professional scouts that despite playing in the Football Championship Subdivision, he had a big-time game. To me, this is what many of the top athletes at Columbia face, including those on the football team. It's a challenge to get scouts and talent evaluators to believe that. Skelton had to prove himself in college, at pre-draft workouts, and I'm sure he'll have to prove himself to all the doubters on the Cardinals, who think a guy from Fordham of all places surely has no place in the NFL. But if he's show one thing, it's that he's willing to do that over and over again if it means a shot to play on Sundays. As for us, hey, if a guy from Fordham of all places can make it, why can't it be one of us?