New Museum exhibit is black and white and read all over

New Museum exhibit is black and white and read all over 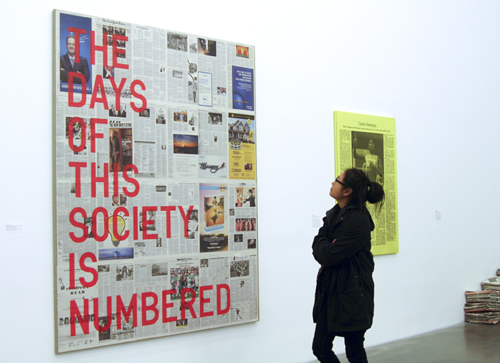 A cohesive collection of interactive art uses the black and white foundation of newspaper print to set the stage for a new wave of gallery exhibition style. On Wednesday, the New Museum in SoHo opened an exhibition titled "The Last Newspaper," which focuses on artists' reactions to the news and how these reactions are incorporated into works of art. Compositions by renowned artists such as Hans Haacke and Judith Bernstein are brought together under one roof in an effort to recontextualize the influence of newsprint. "The Last Newspaper" features pieces from 27 artists as well as interactive, on-site contributions from nine groups of artists visiting from around the globe. According to co-curators Richard Flood and Benjamin Godsill, the goal of the exhibit is to portray how artists have rooted their reactions to the media in their own innovative art. Over the next 10 weeks, a portion of the gallery will act as a center for public interaction where contributing artist groups can exchange ideas with visitors about the content of the exhibition and the specific projects each group will produce on-site. Unlike other museums, the New Museum strives to experiment with the "socialization of the museum space," Flood said. The gallery space is filled with art and intellectual dialogue expressing the way in which news publications play a definitive role in people's everyday lives. The pieces address a range of topics, from popular culture and on-camera murders to the downfall of Saddam Hussein. The artists used various types of materials, such as yellow Plexiglas frames, mannequins dressed in wigs, and, of course, newsprint. A plethora of interactive pieces were also on display, including a collection of the morning's local newspapers for any visitor to rip up and add to a bulletin board. Godsill described the piece as a way "to create a space for the audience to take part [in the exhibit] in an active way." The most recent work on display is a series of paintings done by the artist Nate Lowman, whom Godsill described as a "young, brightly energized artist." The exhibit refers to Lowman as an "image thief" who stole images from pop culture, art history, and the news for his own artistic purposes. Lowman's collection of paintings and ink blots may catch the eye of the pop-culture-savvy viewer. Social figures such as Justin Bieber, Lindsay Lohan, Jake Sully and Neytiri of "Avatar," and Michael Jackson are featured in four of his 17 paintings. This portion of the exhibit will expand over time as Lowman adds additional paintings. As one of the contributing artist groups stationed at the gallery, Jeffrey Inaba and the Columbia Laboratory for Architectural Broadcasting displayed a piece titled "Cloudy with a Chance of Certainty." The piece, consisting of three mounted plasma screens, demonstrates the impact weather can have on cities across the country. Posted quotes by weathermen, such as "Hang in there," "This again is an estimate," and "Cross your fingers," point out, in a comedic tone, the unpredictability of the weather and the persistent attempt of forecasts to master the unknown. A second group, Latitudes—a curatorial organization based in Barcelona, Spain—will compile, edit, and publish a weekly newspaper that will catalogue information about the exhibit and the contributing artist groups over the next 10 weeks. To emphasize its importance, Flood referred to this publication as "the journal of the exhibition." Columbia alumni teamed up with Kazys Varnelis, a faculty member and director of the Network Architecture Lab at the Graduate School of Architecture, Planning, and Preservation, to form a third artist group. In contrast to Latitudes, NetLab will create several issues of a graphic publication titled "The New City Reader" to focus on the active role of newsprint in New York City. The current issue shines light on the 1977 blackout and how news continued to flow even as the city came to a sudden halt. The publication has a number of illustrations that vividly demonstrate the events of that day as the city sat in darkness. "The Last Newspaper" has taken elaborate and innovative steps to differentiate itself from stereotypically static art exhibits, and instead mirrors the accelerated and ever-changing culture of newsprint. Topics covered by news publications worldwide can range from the bizarre to the unfortunate. In any case, Flood said, a newspaper—not unlike art itself—is a "work that exemplifies all of these issues."