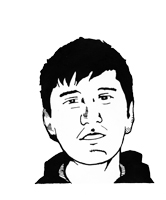 The POTUS Project needs to be aborted ASAP. It's not that I don't like Obama. I actually like Obama. Hell, I love Obama. I am crazy in love with Obama. See my picture to the left? That's my crazy in love face. I want to hug him. So we've established that I like Obama. Unfortunately, POTUS is the worst strategy to get him to come here ever.more Here's the thing. Obama is like this particular super hot girl who lived on my Carman floor: really popular, she was interested in politics, had great legs. Columbia University, on the other hand, is like me: not very fun, really into making sure everyone follows Butler Library rules, maybe socially retarded. The rest is Middle School Psychology 101. Empirical evidence shows that to attract someone really popular (be it hot Carman floor mate or President Obama), the best strategy is show passive disinterest. This strategy distinguishes you from everyone else's behavior. This strategy makes you smooth and cool. The absolute worst possible strategy is to try too hard, demonstrate all sorts of needy unrequited affection, and come off way too desperate. How do I know that POTUS won't work on Obama? Perhaps he's a different type of hot girl? Perhaps one who lived in John Jay? Irrelevant! All hot girls are exactly the same. In two critical ways. First, they are usually very hot. Second, the POTUS strategy never works on them. You can always win them with disinterest. Just take a look at past places where Obama gave speeches. In May 2010, Obama spoke at a college in Michigan, where only 57 percent voted for him in the presidential election. In May 2009, he spoke at a college in Arizona, where only 45 percent voted for him. In June 2009, he spoke at a college in Egypt, where 0 percent voted for him! Don't learn this lesson the hard way, Columbia University in the City of New York. Unfortunately, I only acquired this wisdom by writing thirty wall posts on my hot Carman floor mate's Facebook after I downed 1.5 shots of vodka on my 19th birthday. My deepest fear is that POTUS Project's misdirected proposals to "flood the White House with personal letters," "create over-the-top productions in President Obama's honor," and "make notable noise" are headed down a similar path of half-drunk self-destruction. WTF POTUS. ABORT ASAP.