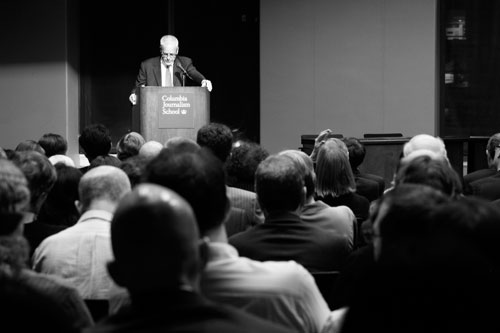 Martin Nisenholtz, the senior vice president of digital operations at the New York Times, addressed students at the launch of the Tow Center at the Journalism School.

At an evening peppered with Columbia Journalism School faculty and press stalwarts, the Tow Center for Digital Journalism tried to send a message to the nation's J-schools—the cutting edge of media education has arrived.

After several years of fundraising, structuring, and faculty hires, the J-school finally launched its digital media reporting and production center Tuesday. And speakers like University President Lee Bollinger, Martin Nisenholtz, senior vice president of digital operations at the New York Times, and center director Emily Bell led a celebration that should mark a shift in priorities and curriculum for one of the premier journalism schools in the country.

Still, speakers acknowledged that it was a double-edged sword—though digital media brings increased opportunity for journalists, it also exacerbates existing problems in the print media and the 24-hour news cycle.

For Bell, who previously worked at the Guardian, the Tow Center would be about addressing these difficulties, especially for aspiring journalists. "The overarching idea is to make the Tow Center the place where technology and journalism meets, and where education practice meets."

The center would be instrumental in shaping the role of journalism education, Bollinger, a First-Amendment scholar himself, said.

"The press is the second to last institution to find itself. The last will be the university," Bollinger said. "Not many professional schools are willing to be so revolutionary."

Bell also unveiled a firmer outline for how the Tow Center plans to proceed—one rooted in research development and curriculum updates.

"We want to encourage research that has a practical application and that helps clarify and demystify digital journalism," she said. Through the use of reports and studies, students can use hard data in order to gain meaning and insight on how their work is received or circulated, and learn how to build an audience.

Another goal is to update the J-school's curriculum and provide new courses. Last semester, the University introduced a joint degree between the journalism school and the School of Engineering and Applied Science. The joint degree is a five-semester course that requires students to divide their time between computer science and the J-School, and it's already received plenty of interest, according to Bell.

Bell said she encourages joint research through any other applicable graduate schools at Columbia University. She predicted that the J-school may collaborate with Columbia's Graduate School of Architecture, Planning, and Preservation in the future.

Bell also stressed that a goal of the Tow Center is to make the school a center of international thought and debate. "I would like to see seminars and conferences where technologists and journalists discuss the really interesting challenges that digital journalism faces—as I think this has to be the partnership which pushes journalism forward," she said.

The New York Times' Nisenholtz provided some practical perspective on what up-and-coming reporters could expect to see in their studies, especially considering the changing face of the media game. While he opened his speech joking about Steve Jobs, Nisenholtz pointed to the New York Times' collaboration with iPad applications as a way that the company has adjusted to advancing technology.

"Thirteen different teams had to work together in order to construct the New York Times' app, collaboration and synthesis are key in the new frontier that is digital media," Nisenholtz said. "Journalism is not only shaped by art, but also technology."

Although the Tow Center will not have students until 2011, those in attendance seemed optimistic about its potential, even though it was unclear what kind of courses or opportunities the center would offer.

"This is really exciting," Jason Alcorn, Journalism '11, said. "I'm glad that the journalism school is experimenting in leaps and bounds. Emily Bell has done phenomenal work and this is a great opportunity to learn under her."

Others showed up at the launch simply to browse the center's offerings. "I don't know much about it," Pamela Lin, Journalism '12, said. "I am here at the reception to learn more about the center. I might take some classes through the program."

Administrators remained firm that the Tow Center was breaking into the future of new media.

As the J-School's Dean Nicholas Lemann put it, "The center is our obelisk from the '2001: A Space Odyssey.'"