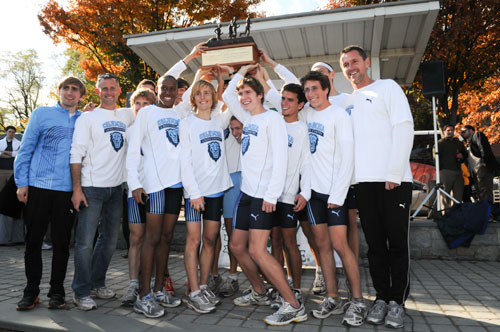 Members of the 2009 Columbia mens cross country team hoist the Ivy League championship trophy. The squad will look to repeat this weekend.

After months of training and weeks of practice meets for the men's and women's cross country teams, everything will be decided this Friday. At 11 a.m., the Light Blue women will dash from the starting line in Van Cortlandt Park in the 2010 Ivy League Heptagonal Cross Country Championship 5k race. For the men, a five-mile race looms ahead on Friday at 11:45 a.m. At Heps, all members of the Ancient Eight will convene on one course to determine who can call themselves the best in the league. The Columbia men are the defending league champions after beating Princeton last year by a one-point margin. The Tigers had won Heps for three straight years coming into last season, but all of that changed with the efforts of five speedy Lions. This year, the Light Blue pack will be led by senior Brendan Martin, who was the first Lion across the line last year, with a fifth-place finish overall. Martin will be joined by fellow seniors Anthony Merra and Thomas Poland, as well as junior Justin Heck and sophomore Benjamin Veilleux, who should round out the top five. Columbia will have stiff competition, as Princeton has another strong men's team this year. But despite this, the team has confidence for Saturday's race. "I think as a team, we are much deeper and more fit than last year," Poland said. Team leader Martin shared a similar sentiment. "I guess you could say that last year's win does give us confidence because we know we can get it done," he said. "We can beat these guys." The team has been focusing on key aspects of the race to make sure its runners are prepared. One thing the team struggled with in 2009 was getting stuck behind the pack at the start. Last year, "I was buried at the mile mark and it was nerve-wracking," Martin said. "At pre-nationals two weeks ago, we focused on getting off the line well. We succeeded with that, so I should avoid that problem this year at Heps." The Light Blue women will also have their work cut out for them this Friday. The team finished third last year behind a tip-top Princeton squad—which finished with a perfect score of 15 when its women were the first five to cross the line—and the reigning runner-up Dartmouth. Leading the pack for Columbia in the women's race will be senior Jackie Drouin and sophomore Caroline McDonough. Drouin was the first Lion to cross the line in last year's race, with an eighth-place finish overall. McDonough competed but didn't score points for Columbia last year, but she's looking to change that on Friday. The Tigers have won the Ivy League championship for four straight years on the women's side, and they are favored to win the title a fifth time. Despite the challenge, Columbia's women are ready for a fight. "This year, we have the potential to do much better because our team is a lot stronger and deeper. This year, I think we can claim the title," McDonough said. "Knowing in the back of our minds that we have the potential to win has been a huge source of motivation for our team to train hard, take care of ourselves, and build a cohesive and supportive team dynamic." Though the women have been preparing all season for this race, they don't seem worried about it. "No one is stressed or anxious," Drouin said. "We all feel ready and confident." The Lions also have an advantage over the seven other schools competing this weekend—course experience. "I think ... having practiced on the course several times throughout the season lends a large advantage to our team over the other Ivies," McDonough said. "Parts of the course are deceptive, and it is a huge benefit to know where to push yourself and where to settle during the race." Poland said the same was true on the men's side. "I think being able to run on the course twice a week all fall will help us come Friday, because we are so familiar with every hill and aspect of the course," he said. Even with home-course advantage, there is still tough competition ahead for both Lion squads. Head coach Willy Wood, however, has faith in his runners. "This team possesses amazing maturity and a drive to achieve," Wood said. "They have collectively improved weekly, and the energy is very positive heading into Friday." On both the men's and women's sides, each runner will need to have the best race of his or her season. Both teams have serious challenges awaiting them on the course, and passive racing won't be enough if they hope to fight for the championship title. When asked what will be needed from each squad on Friday, Wood said, "We need seven runners on each team to perform heroically and the other five to die trying."