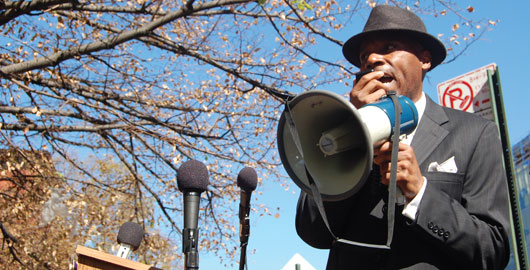 State Senator Bill Perkins is urging the Supreme Court to accept the case against Columbias Mville.

As opponents to Columbia's Manhattanville expansion seek to get their case heard before the nation's highest court, one prominent Harlem politician has officially stepped into the fray. State Senator Bill Perkins urged the United States Supreme Court to accept the case by filing an amicus brief with the court on Oct. 25—a document, literally meaning "friend of the court," written by a party not directly related to the litigation, but who has an interest in the case under consideration. Perkins, a Harlem representative opposed to the use of eminent domain for Columbia's campus, has long been an advocate of reforming New York state laws concerning eminent domain—the process by which the state can seize private property for "public use" in exchange for market-rate compensation. New York State Eminent Domain Procedure Law lacks transparency, accountability, and a set of explicitly defined terms, according to Perkins. As one of the few, if only, local politicians vocally against the University's use of eminent domain for its construction, he has argued that the current state laws are rigged in favor of condemnors, who use the system's ill-defined language and numerous loopholes to unlawfully seize private property. "We've been concerned with questions of eminent domain and its abuse, and this is a case we think is significant in that regard, especially in terms of what is meant by 'public use,'" said Perkins, who has held a series of eminent domain hearings across the state of New York in an effort to garner support for reform of the laws, but has been unable to get a bill passed in the state legislature. "When the door to the legislative process is hard to get through, there's always the judicial process." Perkins' latest move comes on the heels of a significant ruling in which the New York State Court of Appeals declared this summer that eminent domain can be used to obtain private properties in West Harlem. This outcome was a major victory for Columbia, as it effectively paved the way for the University to acquire the remaining private property in the neighborhood. Now, the attorneys representing two property holdouts, who have refused to sell to Columbia, are appealing the decision to the Supreme Court of the United States, arguing that the decision promotes an abuse of eminent domain law and violates fundamental constitutional rights. In Perkins' brief, which Spectator obtained a copy of on Tuesday, he echoed the attorneys' argument, asserting that the Court of Appeals ignored legal safeguards articulated in the landmark 2005 Supreme Court ruling in Kelo v. City of New London­—in which the Supreme Court ruled that land could be transferred from one private owner to another through eminent domain in order to promote economic rejuvenation—and in the process abdicated its responsibility of judicial law review. Furthermore, he writes in his brief that process of eminent domain unfairly targets minorities and poorer sectors of the population. "The need for clarification of Kelo's taking jurisprudence on pretext is especially important given the nature of urban redevelopment in the United States, which targets the most marginal and least influential communities," Perkins argues in his brief. "Far too often, its negative impacts have fallen disproportionately on racial and ethnic minorities and the economically disadvantaged." For those directly involved in the case, Perkins' amicus brief is a much-welcomed document. They hope it will increase the probability of the Supreme Court presiding over their case, despite the statistical unlikelihood of this happening—last year, over 8,000 cases were filed, and only approximately 80 of those were taken by the court. "The idea is that when you have more serious documents coming in, briefs of this sort by well-known, well-meaning think tanks and elected officials and the like, I think that's the type of thing that law clerks who do a first read [of the briefs] will look at," said David Smith, attorney of gas station owners Gurnam Singh and Parminder Kaur, who are among the holdouts in the case. Smith added that in addition to Perkins' amicus brief, think tanks including the Cato Institute, the Institute for Justice, and the Pacific Legal Foundation also filed briefs. Yet some experts say that Perkins' brief may not necessarily be of benefit to the parties on whose behalf he wrote. "A brief from an unknown person that makes a new argument is more helpful than a brief from a well-known person that makes a point other briefs have already made," law professor Christina Burnett said. But by virtue of Perkins' role as a political figure, his brief may even carry less weight than it would coming from someone in a different position, according to some experts. "Politicians send amicus briefs in for their own political purposes," political science professor David Epstein said. "Coming from a state senator, the court might see it as a political statement and not a legal issue." Still, others counter that Perkins' political career must be viewed separately from his amicus brief, which they say is entirely grounded in legal arguments—not political ones. "The amicus brief by Senator Perkins is exclusively legal and based on policy, and it cites numerous cases and articles," said Norman Siegel, attorney for one of the holdouts, Tuck-it-Away Storage owner Nick Sprayregen. "What the amicus brief from the Senator does, it makes the point that the Court should take the case because the New York Court of Appeals ignored the Kelo decision, and that's clearly a legal point." news@columbiaspectator.com