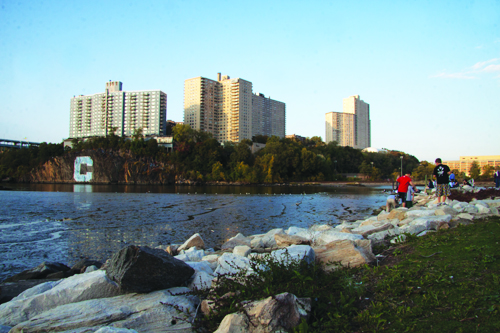 On the Inwood waterfront by Baker Field, any trace of a rich ecosystem has been largely erased. Though it's one of the only remaining salt marshes in Manhattan, plants and wildlife are sparse, and the water quality is low. Along with a five-story sports center, the University, as part of a $50 million project, also plans to create a new waterfront park space—dubbed the Boathouse Marsh—which will include a new boathouse and restored salt marsh and freshwater marsh areas. "A wetlands restoration in a place like that would be very, very good because that area is pretty unique, ecologically," said Steve Cohen, executive director of the Earth Institute. Because the Baker Complex is situated on the water, city law requires that the University provide 15 percent of its land for public waterfront access if it starts any new construction. But the complex, much of which was built prior to that law, makes it impossible for the University to offer that percent when they build the Campbell Sports Center, officials say, and Columbia has asked for a waiver in exchange for the 1.1-acre park and restored wetland. Part of the land is technically public property, though the city has not used it and has given the green light for Columbia to carry out its restoration project in full. "Since a great deal of land that's being used along the waterfront area has dubious legal ownership ... accommodations can be made so that there's more public access to the areas like the boathouse and the launch there along the shoreline," said David Kach, assistant chair of the Community Board 12 Parks and Cultural Affairs Committee. The waterfront area will be designed by James Corner Field Operations, the landscape architecture company that created the High Line Park in Chelsea. Renderings of the park space near Baker show a boomerang-shaped boardwalk connecting to a dock space and the restored wetland. Because the waterfront public access area will be open to the public, the University has said that local residents will be able to benefit from the recreation space, picnic tables, and the boathouse itself. A group of kayakers in Inwood Hill Park near Baker Field last weekend said the dock would be useful for them. "This is a cool spot to put in for the circumnavigation of Manhattan, which is what we're doing today," said Kenny Lozer, one of the kayakers. "We have permits, but right now, this is not one of the designated access points." The Boathouse Marsh will support a diverse range of native wetland plants, and its freshwater marshes will improve water quality in the river, officials say. "The [environmental] implications of the proposal are positive," Koch said. "The area up there is a natural salt marsh. Anything we can do to preserve and add to that salt marsh area is going to increase the biodiversity." Cohen added, "It looks like it's a very well thought-out project with benefits for the students, benefits for the community, and benefits for the local ecology." But David Brodherson, an architecture historian and member of the Inwood Mobilization Committee, which has been speaking out against Columbia's Baker Field plans, said he's not convinced the plan will accomplish its goals. "It's just under an acre, and with people walking through it, there won't be any birds there," he said. "The people picnicking and carrying boats will be scaring critters off." And at a town hall meeting held in early October, local residents expressed concern about who would be maintaining and securing the park area and how residents with canoes or kayaks would be able to reach the dock. To Rita McMahon, who treats and helps birds at the Wild Bird Fund, the space has immense potential as the last remaining natural estuary in Manhattan, but the problem is that it's being "park-ified," or made into a place for pedestrian use at the expense of wildlife. "The birds that are coming by now, which are a good number, are not really breeding there. They don't have enough space," said McMahon. "It really just takes about an acre of wetlands with appropriate natural grasses to provide a breeding space for birds." Sarah Darville contributed reporting. news@columbiaspectator.com