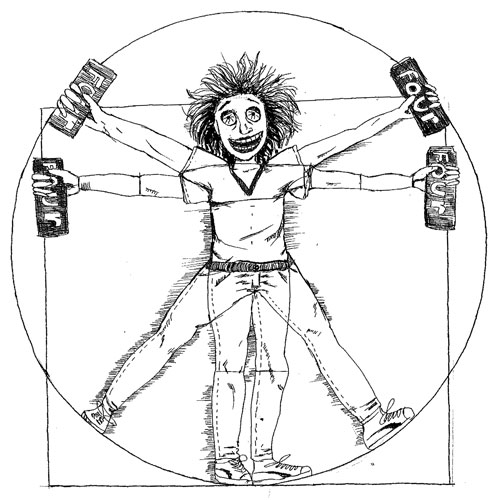 Four Loko is seen as a witch's brew of alcoholic drinks and the hyperactive problem child—truly a drink frightening enough for any Halloween. The name itself conjures images of a tweaking lunatic, and it is popularly characterized as a catalyst for sloppy, feverishly energetic, and sometimes dangerously drunken nights. Four Loko's infamy stems from its potent combination of caffeine and alcohol, and with the recent slew of college bans and discussion of a New York citywide prohibition, it seems this infamy is slated to become illegality. But we're all big boys and girls, capable of making responsible decisions without an overbearing governmental nanny. Making Four Loko illegal would be absurd. Four Loko is the fast food of alcoholic beverages. It's unhealthy and widely available. It's also quick, cheap and, to some, a satisfying if shamefully hedonistic indulgence. Sure, Four Loko isn't the best for you. Neither is fast food, but would you want a law denying you the occasional greasy burger? The choice to drink Four Loko is one that, if the risks are well understood, should be left up to the individual. By banning it, the city or University would be ripping the quarter-pounder from your mouth because it feels you can't handle the responsibility. But that doesn't completely capture it. What makes the question of banning Four Loko absurd is the inherent uselessness of such a ban. Caffeine is legal. Alcohol is, for the most part, legal. And it takes little more than a brainstem to be able to mix the two. In fact, Red Bull and vodka is a favorite at college parties and bars alike, and Irish coffee has been around for ages. The ban is really saying you can buy a hunk of lard, a pound of meat, a sesame bun, and fry up your favorite royale with cheese, but you can't run over to a restaurant and buy one. It would be legislating inconvenience as opposed to law. Granted, unlike Four Loko, fast food can't send you, at least immediately, to the emergency room—but the hysterical response to isolated cases of excessive drinking is completely unwarranted. Consumers are drinking caffeine and alcohol together, which is something that many do anyway. It's not ideal, but it's not death in a can. Those who found themselves in the hospital did so only after drinking two, three, or four 24 oz. cans of Four Loko each, an obscene amount of alcohol (and caffeine) for any one person. Of course these excessive drinkers suffered complications, as they would with many other drinks, caffeinated or not. It's an issue of the person, not the drink. I don't like Four Loko. Actually, I only know of a handful of people at Columbia who really do. Maybe the University or the city will decide to ban the drink. It will be an unnecessary infringement on individual rights, but nobody's life will be drastically altered. The majority will continue drinking its non-caffeinated drink of choice, and the rest will just whip out the cauldron and twitchily mix their witch's brews themselves. The author is a Columbia College first-year.